Coronavirus: Rest of 2020 Six Nations to go ahead as planned 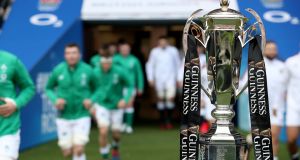 Tournament organisers have confirmed the rest of the 2020 Six Nations will go ahead as planned. Photograph: Dan Sheridan/Inpho

As things stand the remaining games in the 2020 Six Nations, including France v Ireland in Paris on Saturday March 14th, are set to proceed as scheduled although there remains the possibility of the match being played behind closed doors or being postponed.

This follows a meeting of the Six Nations executive committee in Paris (on Monday) to address the current situation regarding the Covid-19 virus, after which they issued a statement stating that all the scheduled games in the remainder of the Six Nations are set to go ahead.

However, as with all pronouncements in the current, ever-evolving climate, the statement also made it clear that this is subject to change. “Six Nations and its six unions and federations are following the situation very closely with their respective governments and relevant health authorities and will strictly follow any directive given that would impact sporting events.”

Last Saturday the French Health Minister Olivier Véran banned all public gatherings of more than 5,000 people in a “confined” area across France, a measure which was interpreted as placing the France-Ireland game in serious doubt.

However, this did not immediately apply to sports events, and to that end a full round of Top 14 games (including Bordeaux Bègles at home to Castres and Toulon hosting Stade Francais on Sunday) went ahead, as did a full programme of Ligue 1 matches in football.

That said, the Paris half-marathon with more than 40,000 runners was cancelled and the capital’s annual farm show closed a day early on Saturday, with Véran also adding the proviso: “These measures are temporary and we will likely have to revise them. They are restrictive and paradoxically we hope they don’t last long because that means we will have contained the virus’ spread.”

Véran has also indicated that further steps could be brought into place, namely that events, including sports, take place behind closed doors, with the further possibility of a two-week ban on flights in and out of France. What’s more, according to Paris-based French journalists who door-stepped the Six Nations executive committee meeting on Monday, such measures could be taken right up to an hour before the scheduled 9pm kick-off (local time).

In the event of such scenarios, it would then be up to the Six Nations to decide whether to proceed with the game behind closed doors - when France might be on course to claim a first Grand Slam in a decade in front of what would otherwise have been a capacity 80,000 crowd - or postpone the game in the hope of re-arranging it for a later date.

The Six Nations executive committee also made it fully clear that they intend to complete all 15 matches in the mens, womens and Under-20 tournaments, and to that end will endeavour to reschedule the postponed Ireland-Italy games at all three levels which were scheduled for next weekend. However, they gave no indication as to what dates are even being considered, and an October date remains the likeliest solution, if at all.

“Six Nations intends to complete all 15 games across all three championships when time allows but we will refrain from making any rescheduling announcements for the time being while we keep assessing the situation.”

For the time being, in contrast to the Ireland-Italy games next weekend, the England-Wales and Scotland-France fixtures look set to go ahead.

As for the final round, despite postponements of football matches in Serie A and divisions below the top tier, the Italy-England game on Saturday week in Rome is also set to go ahead although the FIR and the RFU are looking at moving the Women’s and Under-20 Italy vs England matches in Padua and Verona in northern Italy, which has been the most affected by the coronavirus outbreak, to locations in the south of the country.