Andrew Porter fronting up to responsibility of starting Ireland role 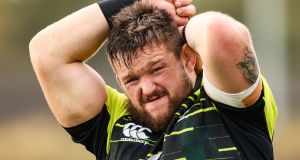 Andrew Porter will carry opportunity and expectation on his broad shoulders into Saturday’s rescheduled Six Nations Championship match against Italy at the Aviva stadium (3.30).

The 24-year-old has worn the number three jersey in Leinster’s high-profile matches of late in the absence of the injured Tadhg Furlong and will fulfil a similar remit for the national side.

He has started four of 26 caps for Ireland, the last of which was coincidentally against Italy in a World Cup warm-up match in August last year. His fifth appearance in the run-on team will be the third occasion on which he’s faced the Italians in that context. Nicola Quaglio has been his direct opponent in the two previous games.

Porter has worked diligently to convert from a loosehead prop to the other side of the frontrow, where the scrum duties are much tougher. It meant that he had to compromise on his carrying in the wider channels that was so prevalent and effective in his underage performances. The natural athleticism has been subsumed to accommodate a narrower focus based on team requirements.

There have been a few rough days, notably Leinster’s recent Champions Cup defeat to Saracens as the English side squeezed a handful of penalties at the scrum. Those issues can’t be laid at the feet of one player but everyone takes a portion of the responsibility.

Porter grimaced good-naturedly when asked to offer an insight, admitting that he was “trying to block it from the memory”.

“They played on top of us really, there were times we went inside ourselves and when things weren’t going well we compounded errors. It was very hard to dig ourselves out of the hole we put ourselves in, in the first half. You can’t let teams like Saracens or anyone have that kind of dominance.”

The Italian pack once forged a reputation as a fearsome scrum unit but is less corrosive these days. The fact that the provinces play against them on a regular basis in the Pro14 has ensured a familiarity on both sides.

There are potentially four players who will make their Ireland debut on Saturday, Hugo Keenan and Will Connors in the starting team and Ed Byrne and Jamison Gibson-Park from the bench. Byrne’s story in coming back from two serious knee injuries that saw him sidelined for over two years in total offers a window into his character.

Porter provides further detail. “I don’t like scrummaging against him,” he laughed. “He’s one of the hardest workers you’ll ever meet. He’s had a few tough years but he’s overcome all that. It’s incredible to see all the hard work he’s put in over the last few years have paid off and I definitely think that he’s well capable of playing at this level.

“He’s one of those guys on your team who is so passionate about everything, the team and the guys around him. He gives that extra boost and bit of energy, he’s another leader on the pitch and an amazing lad off it as well.”

The fact that there are only two looseheads in the current Irish squad means that Porter is the ‘break glass in case of emergency option’ as cover, although he pointed out that it’s not simply a case of jogging across to the other side of the frontrow at scrum time.

“Yeah, I’m very adaptable in terms of going back and forth between them but it’s obviously something I haven’t done in a while, so if I was called upon to do I’d have to get my reps in training.

“It’s not just like getting back on the bicycle you really have to stick with it because obviously I’ve been scrummaging tighthead for the last few years now so it’s your habits as well. If I was called upon to do it I’d be more than capable, I’d say. I’m adaptable in that sense.”

The players are aware that vast swathes of Irish people live vicariously through sport when a national team is playing and that on Saturday they have an opportunity for 80-minutes to make life briefly more enjoyable during the pandemic. Porter concluded: “Hopefully we can make a difference in terms of giving them that excitement this weekend and the weekend after as well.”