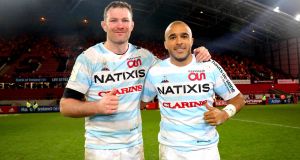 The Heineken Champions Cup final has brought its fair share of joy from an Irish perspective and that is set to continue irrespective of whether Racing 92 or the Exeter Chiefs prevail.

Simon Zebo and Donnacha Ryan will wear the famous Parisian team colours while Ian Whitten and Gareth Steenson, who retires from rugby after the match, will be part of the Chief’s cohort. Racing backs’ coach and former Munster scrumhalf Mike Prendergast, a proud son of Limerick, will also have some skin in the game.

Irish provinces have claimed the trophy seven times with Leinster leading the way on four, followed by Munster (two) and Ulster, the first Irish winners in 1999. There have also been individual milestones for Irish born players who have achieved success while representing French and English clubs throughout the 25 seasons of the tournament.

Togher’s Brian Roche is the answer but what’s the question? Well that would be the first Irishman to win a Heineken Cup winner’s medal. Roche, who played hurling for the St Finbarr’s club and was good enough to make the Cork Minor panel, was offered a professional contract with Bath while at Sunday’s Well and agreed to move to England in the summer of 1997.

He played for Bath during the pool stages of the 1997-1998 deputising for wing Ieuan Evans who was away on honeymoon in a backline that contained Jeremy Guscott and the current Ireland backs’ coach Mike Catt.

The English club went on to beat Brive 19-18 in the European Cup final that season and although Roche didn’t make the matchday squad he was subsequently presented with a winner’s medal for his earlier contribution in the tournament. He returned to Ireland, played for Munster the following season and then Shannon in the All Ireland League before resuming with Highfield where his rugby career had started.

Roche said in an interview of his time with Bath. “I saw my Heineken Cup medal as a token from Bath after being involved in the group stages and was happy to accept it and put it away then. I do see it as an honour but it’s done now and I move on. I don’t talk about it.”

He came through the IRFU coaching system and also got a qualification in fitness, working across several sports including with the Cork senior hurlers for a time.

The first Irishman to be part of a Heineken Cup final was referee Dave McHugh who officiated in the inaugural competition when Toulouse beat Cardiff. Eric Miller was the first to play in a European final when he came on as a second half replacement for Dean Richards in the 1997 when Leicester Tigers lost to Brive. Outhalf Niall Malone was an unused replacement that day.

Ulster won in 1999, Northampton Saints beat Munster in 2000, so the next Irish player to contest a European final while not playing for a province was Geordan Murphy when the Tigers beat Stade Francais (2001) - McHugh refereed this one too - and he was a try scorer the following year when Leicester beat Munster.

Current backs’ coach with today’s finalists, Racing 92, Prendergast was an unused replacement for the Irish province that day. Toulouse’s favourite adopted son, Trevor Brennan, played in three consecutive European finals for the club, winning two, against Perpignan - Alain Rolland refereed - and Stade Francais with a defeat to Wasps sandwiched in between.

Irish openside flanker Johnny O’Connor had been a standout player for Wasps that season but missed the final through injury. In between Munster’s outright wins in 2006 and 2008, Wasps beat the Tigers in the 2007 final and there was a glut of Irish players in action.

Eoin Reddan scored a try for Wasps, Peter Bracken came on during the contest but despite recovering from a hand injury Jeremy Staunton didn’t have enough time to force his way into the matchday squad. Geordan Murphy, Frank Murphy and Shane Jennings started for Leicester that day with Ian Humphreys and Leo Cullen coming off the bench in a game refereed by Alan Lewis.

In 2009 Geordan Murphy, contesting a fourth final, captained Leicester in their defeat to Leinster with Johne Murphy amongst the replacements. Two years later centre James Downey and number eight Roger Wilson were part of the losing Northampton Saints team against Leinster with the latter making it two titles in succession when beating Ulster the following year.

Rolland officiated for the first two of Toulon’s three successive final victories while Mark McCall has been the head coach through Saracens four appearances in the decider, consisting of one defeat and three victories including last season’s triumph over Leinster.

1 Unanimous or unfair? Opinions divided on Sam Bennett’s Vuelta relegation
2 Ronan O’Gara: Ireland need to be braver than usual ‘in a shoot-out for gold’
3 Six Nations - France v Ireland: Kick-off time, TV details, permutations, team news and more
4 Jackie Tyrrell: We’ve got the championship back. But where’s the physicality?
5 Ireland can treat fans to some tricks on Halloween night in Paris
Real news has value SUBSCRIBE