All Blacks wrap up title in Argentina 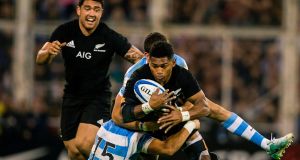 New Zealand celebrated their fifth Rugby Championship in six years with four tries in a devastating first half to beat Argentina 36-10 at Velez Sarsfield on Saturday night.

The All Blacks had retained their crown earlier in the day when South Africa were left without a chance of catching them in their final meeting next week after being held to a 27-27 draw by Australia in Bloemfontein.

Captain Kieran Read scored two tries as his team led 29-3 at the interval but earned one of two All Black yellow cards, the other going to Matt Todd, in a ragged second half for his team as the Pumas recovered from their poor, undisciplined first half when they had lock Tomas Lavanini sin-binned.

Waisake Naholo and fullback Damian McKenzie also scored first half tries as Argentina replied with a try from 80-cap veteran Juan Manuel Leguizamon and kept the All Blacks out until debutant David Havili went over for his side’s fifth after the full-time hooter.

“We ended up with a half of rugby that we aren’t overly excited about,” New Zealand coach Steve Hansen said. “But we’ve got some great lessons out of it for a young group of players . . . losing your skipper was great for us because we ended up needing someone to lead the team.

“I’m very proud we came here and played very well in the first half and did things right. It’s a difficult place to play.”

Argentina’s errors and indiscipline from the first minute when they failed to field New Zealand’s kick-off surrendered the initiative and put them on the back foot.

Beauden Barrett, who kicked 11 points, orchestrated fast moves that scythed through the Pumas defence in a complete contrast to the teams’ previous test in New Plymouth in which Argentina led at half-time before an All Blacks surge in the last half hour gave them a 39-22 win.

Read opened his team’s try count after seven minutes when he crossed in the corner at the end of a sweeping movement, then McKenzie took a quick tap free kick that caught the Pumas napping and dived over under the posts.

Barrett then superbly laid on a try for Naholo with a neat backhand pass as the pair raced down the right wing.

The 2016 Player of the Year then revived a loose ball with a pass between his legs to send Read over for his second try before half an hour had been played.

A dressing down by coach Daniel Hourcade at half-time saw the Pumas, who have never beaten the All Blacks in 26 tests, come back out determined to put on a better show for the full house at the Jose Amalfitani stadium.

They might have had more than the one try scored by Leguizamon in the 53rd minute but came up against stern All Black defending and had replacement prop Ramiro Herrera sinbinned towards the end for repeatedly collapsing the scrum.

However, they denied New Zealand any more points in a reversal of their usual performances which tend to be better in the first half until replacement fullback Havili darted through a gap at the death.

Argentina were aided by a lacklustre second half by the world champions who could have had more tries but were let down by kicks ahead that were too long and a Naholo try disallowed after a forward pass.