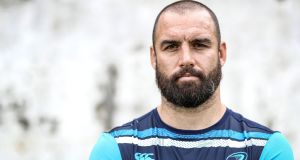 Scott Fardy: “That’s what Leinster want from me, to play like I normally play and play to the best of my abilities, week in, week out.” Photograph: Dan Sheridan/Inpho

International recognition only came at the age of 29. Access to the pro game, and this end-of-career Euro pay off, almost entirely passed him by. The Waratahs and Western Force had a glimpse before sending him back down to the minor leagues.

Next, the Kamaishi Seawaves took him in.

“I was pretty bitter and twisted when I left Australia for Japan,” said Fardy once upon a time. “I couldn’t get a run of Super Rugby and I couldn’t understand why.”

Plenty would have an opinion. Someone with Michael Cheika’s origins couldn’t care less.

“I didn’t come through the normal avenues in Australia; I was a public school boy not a private schoolboy,” said Fardy last Monday before he returns to the Leinster engine room after missing the South African tour because Penelope, his wife, is expecting.

“Just played a lot of club rugby and worked my way up through the system in that way. Bit of an old school journey. Been around for a while now . . .The vast majority of professional players in Australia are still from the private school system – maybe that’s the best place for talent, I’m not sure but that’s for another day.”

Japan provided more than rugby redemption. It exposed Fardy to the devastation caused by the March 2011 tsunami after an earthquake registering 8.9 rattled his seaside town in the Iwate prefecture.

“It was like a nuclear holocaust,” said one team-mate. The Australian embassy offered Fardy an escape hatch but he hunkered down, building fires to keep people warm and helping in whatever small way he could to piece a shattered community together again.

“I didn’t want to leave, I was young and healthy,” Fardy recalled in 2013. “I saw a few things happen that were pretty nasty. It changes the way you think about things. It made you think about what’s important in life, for sure.”

A year later the ACT Brumbies signed him for pennies – a $40,000 (less than €27,000) rookie deal. He was 28. Dome head and heavily bearded, he began tearing up trees. Ewen McKenzie capped him off the bench against the All Blacks in August 2013. Eight days later he was the Wallabies’ starting blindside in a 27-16 defeat.

On that seminal night in Wellington, Fardy topped the Wallabies’ tackle count, ball carries, threw in two offloads and most impressively of all he was first man over 10 rucks. Richie McCaw knew all about him.

Cheika wasn’t long falling in love. The six jersey was tattooed on his back until last November. In the World Cup final the man raised on the north Sydney beaches more than held his own in a warzone that had Jerome Kaino, Kieran Read, David Pocock and Michael Hooper torpedoing into each other in what proved McCaw’s last game.

All great Leinster sides have included a big lump of a lock from below the equator. Fardy, 33 now, already looks the part with his trademark turnover creating the killer try for Sean Cronin against Cardiff.

Despite his 6ft6in, 114 kilogram frame the initial presumption was that Leinster had signed a square peg to fill a round hole (considering local resources, David Nucifora surely prohibited Leo Cullen from playing him in the backrow).

“Five-eight is my favourite position but don’t play there anymore. I’ve played a lot of rugby at six but also at lock before. In my first two seasons at the Brumbies I played exclusively at lock. It’s a different kind of feel to the game, you’ve got to play a different way but it’s something that I really enjoy.

“If I do my job well, it’s hugely important to the team. I think playing lock is something that I enjoy as I get older. I don’t have to be as quick as playing six. I can get into the middle of the park and really rip in, do a bit of the contact stuff.”

When Leinster were champions of Europe, first Rocky Elsom then Nathan Hines then Brad Thorn stood in the middle of the field for the heavy contact. Big boots to fill.

“I think it’s what I’ve already done in my career, I think that’s what Leinster want from me, to play like I normally play and play to the best of my abilities, week in, week out.

“So I don’t think I have to change anything or be like someone I’m not, I just have to play the best I can and hopefully that rubs off on other players.”