Sene Naoupu included but no place for Jenny Murphy 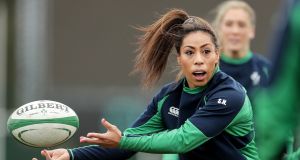 Sene Naoupu has been named in the Ireland squad for the final two games of the Six Nations. Photograph: Laszlo Geczo/Inpho

Leinster captain Sene Naoupu has been named in the Ireland squad to complete the Six Nations four weeks after an operation to remove a tumour from her neck.

“Whether I’ll be in there or not I’ll certainly be doing all the work I can to try and get there,” Naoupu told The Irish Times last weekend.

However, Ireland coach Adam Griggs has not included Jenny Murphy in the 36-strong panel. The Kildare native has fully recovered from a serious knee injury and despite lining out for the Barbarians last year her international exile continues.

Ireland are due to complete the Six Nations at home to Italy on October 24th and away to France on October 31st. Venues and kick off times are still to be confirmed.

The round robin World Cup qualifiers against Scotland, Italy and one more team will take place on December 5th, 12th and 19th. Venues will be announced in November. The tournament takes place in New Zealand next year.

Veteran prop Lindsay Peat has recovered from injury, sustained in Ireland’s last match against England in March, a 27-nil defeat in Doncaster, while teenage sensation Beibhinn Parsons also returns to the group having stepped away mid-Six Nations to focus on her Leaving Certificate.