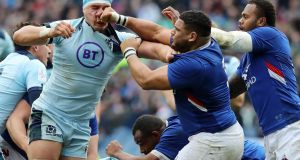 When the rugby briefly broke out again over the weekend in the Guinness Six Nations it wasn’t short of entertainment. All told, there were 11 tries and 108 points scored in the two matches. But it sure wasn’t the most edifying at times.

After six years without a red card, there was a sending off in each game, along with a couple of yellows and some all-in scuffles, with further evidence of the agent provocateurs playing an increasingly prominent role in modern-day rugby. And too often their methods are reaping the desired results.

There’s no doubting that France tighthead Mohamed Haouas deserved his red card for the punch he landed on Jamie Ritchie in the 37th minute of Scotland’s 28-17 win at Murrayfield.

But as long as the sport and the four-man team of officials allow all others to escape scot free, not least Ritchie, for everything that preceded the punch, the disciplinary process is not working.

The mass scuffle was initially sparked by Haouas and the Scotland number eight Nick Haining squaring up to each other, whereupon Haining poked Haouas as his finger came into contact with the eye area of the prop.

Others then joined in, Haining’s action having been spotted by some of Haouas’s team-mates. At this point Ritchie jogs fully 10 paces past several other players to join in the fracas, clattering into the unsighted France hooker Julien Marchand from behind and knocking him to the ground.

When Ritchie and Marchand rose to their feet, the former and Haouas held each other by the throat before the latter threw his right punch into Ritchie’s jaw just as Gael Fickou tackled the Scotland flanker to the ground. That was what felled Ritchie, not the punch.

Had Fickou arrived a little earlier, Haouas would have missed, but the clean connection gave New Zealand referee Paul Williams and his officials no choice. Repeated viewing showed Haouas had to go, but all the replays began with Ritchie rising to his feet.

Before asking for his TMO to show him the origins of the incident, Williams had noted to his assistant Wayne Barnes: “Certainly I’ve seen ‘6’ white come from a long distance to engage.” But that action, and Ritchie clattering into the back of Marchand, was not shown again, and as the replays focused solely on the punch by Haouas, Williams and co seemed to forget about Ritchie’s provocative role.

As Haouas was jogging off the pitch, the camera zoned in on Ritchie, who appeared to be smiling. One ventures that had it been a scuffle in football, Ritchie’s actions would have also earned him a red card. At the very least he should have been sin-binned. Instead, Scotland thereafter played more than half the match against opponents reduced to 14 men.

Joe Marler has been hogging more of the headlines, of course, for bizarrely grabbing the Wales skipper Alun Wyn Jones by the genitals during a scuffle in England’s 33-30 win on Saturday.

By contrast, Jones did not react to this provocative gesture, instead turning to the referee’s assistant. Given how everybody else watching must have seen the incident, quite how neither the latter nor the TMO did not get involved is a mystery.

Jones noted that he had 138 caps for his country, and had he reacted he would have been red-carded. Yet, to be honest, had he punched Marler in retaliation no one watching would have blamed him.

Once upon a time, when self-proclaimed hard man Vinnie Jones, (who would play soccer for Wales) grabbed the English midfielder Paul Gascoigne by the testicles it merely contributed to the Wimbledon man’s celebrity status.

Different sport as well as different times of course, Marler having been cited, he’s likely to be suspended, potentially for 12 to 24 weeks. He deserves to be punished, but it was more a cheeky than a violent act, and a dozen weeks or more does seem excessive.

Not only was it a disreputable act, it was a provocative one which, were it to go unpunished, would set a pretty regrettable example for all the young players watching the match on terrestrial television. The Six Nations is, after all, the sport’s shop window in the northern hemisphere.

Manu Tuilagi has also been cited after being rightly red-carded for launching himself like a human missile in a no-arms “tackle” at George North. Sometimes, it’s true, slow-motion replays can make actions look worse than they are. But if anything this was the other way around. Watching Tuilagi flying through the air in real time made you wince.

Of course it happened in the heat of battle, and in a flash, with Tuilagi determined to prevent a try, but North could have been seriously injured. For Eddie Jones to call the sending off “absolute rubbish” and declare “in the end we were 13 against 16” was disrespectful to the referee Ben O’Keeffe and arguably the game, and also merits a sanction of some kind.

For his part, Alun Wyn Jones managed to retain his dignity, both in the moment when grabbed by Marler and also in his postmatch briefing when staring down giggles in the press conference room.

The Welsh skipper’s experience stood to him in the heat of battle. The 25-year-old Haouas, by contrast, was playing only his fourth Test, and lost control. Maybe it will prove an invaluable lesson for the 25-year-old of Algerian descent, who did time in a young offenders’ prison for robbery and for whom Montpellier and their owner Mohed Altrad (who also rose spectacularly from poverty) were his salvation.

True, relatively speaking, what Marler did was altogether more provocative. But, perhaps, had Jones been winning his fourth cap, the Wales captain might have reacted as indignantly as most in his position would have been entitled to do.

Either way, rugby needs to do something about the agents provocateurs.