Gerry Thornley: Ronan Kelleher could be in the right place at the right time 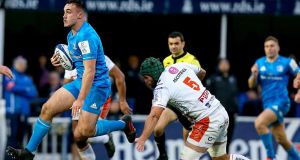 As well as his skill-set, at 6 feet and 105kg, Ronan Kelleher is built like a tank. Photograph: Tommy Dickson

Andy Farrell has been an intrigued spectator at many of the provinces’ games and there’s plenty for him to mull over, most of it encouraging. With a new head coach at the outset of a new World Cup cycle, opportunity knocks for many of those on the outside and already the signs are that there will be several new faces in the mix for the Six Nations. It’s that time.

The Irish team/squad had become very settled in recent years, if not quite a closed shop. But with a clean slate, some players will feel they’ve a better chance of gaining recognition now than previously, while even the most established front-liners will be feeling a fresh heat.

None of this is to suggest that Farrell should jettison a host of front-liners from the World Cup and inject the team with a raft of new young players straight away. The Six Nations is too important a tournament to use it as a developmental competition, and no less than his predecessors, Farrell will need results from the off.

It could even be interpreted as a way of buying time, but the so-called “honeymoon period” won’t last too long if Ireland lose either or both of their opening two games in the 2020 Six Nations at home against Scotland and Wales.

Besides which, Irish rugby does not have sufficient depth to undergo such needlessly radical surgery, but every team benefits from an infusion of one or two new players, and that applies to the provinces as well. Even the most experienced players will feed off a new man’s enthusiasm and energy. Hence there are immediate knock-on effects, both for that squad’s dynamic as well as the relative newcomer himself. No team benefits from standing still in terms of personnel.

The ensuing step up

Such is the structure of Irish rugby that a player can seem a long way from the Test team but, suddenly, if he becomes a regular provincial starter in the Heineken Champions Cup – perhaps particularly so for Leinster – the ensuing step up to the Irish squad can be shorter in some respects.

This is all the truer if a long-standing incumbent retires and, with Rory Best the only member of Ireland’s World Cup squad to call time on his career, Ronan Kelleher is an obvious case in point. Added to which, there is the age profile of the more established hookers, one of whom – Sean Cronin – was unfortunate to return prematurely from the World Cup with a neck injury.

It might seem remarkable that a 21-year-old, who only switched to hooker when he was 16, and came into this season with just two Guinness Pro14 games to his name (a start against the Southern Kings and an appearance off the bench against Ulster), might feature in the Six Nations.

But circumstances can be hugely significant parts of playing careers, and Kelleher’s timing could hardly be better. Sometimes it can work the other way as, say, being a centre in the Gordon D’Arcy/Brian O’Driscoll era, and in that regard Garry Ringrose’s emergence, at the tail end of their careers, was well timed. There’s also countless examples in the backrow.

Kelleher is certainly grasping his opportunity. Such is the potency of Leinster’s maul he has already begun to ape Cronin (last season’s joint top try scorer in the Heineken Champions Cup) with seven tries in his seven games this season. Four of them were at the back of Leinster’s lineout drives, but akin to Cronin, and as you’d expect from the younger brother of winger Cian, Kelleher showed an impressive turn of foot for the first of his hat-trick against the Ospreys in the Pro14.

In order to be an international, a player needs stand-out attributes, something to set them apart, and as well as his skill-set, at 6 feet and 105kg, Kelleher is built like a tank. So it is that, augmenting his anticipation, he often breaks the first tackle, and any team will benefit from having another try scorer in its arsenal.

There have also been some strong close-range finishes and Kelleher picks good lines, while his passing skills are also what you might expect of a player who moved from wing to centre to the backrow before finally settling on hooker.

Like all those who come out of the St Michael’s production line and the Leinster academy, by all accounts Kelleher has a good attitude and is very professional in his approach.

Good judges have been lauding Kelleher’s ability since his Irish Under-18 and Irish Under-20 days, and a couple of campaigns with Lansdowne in the AIL have fast-tracked his development, not least in his scrummaging and throwing, which are highly regarded.

Kelleher also places great importance on his defence, and there were a dozen tackles, with none missed, in the win over Benetton.

All that said and done, Farrell, Simon Easterby and John Fogarty have options here. In observing that “the Irish are a little bit more skillful than the Australian players” recently, Stephen Larkham cited the example of Niall Scannell. “He is one of the most skillful hookers I have ever seen and his work-rate is second to none.”

Rob Herring has finally become the first-choice hooker at Ulster and while age might count against the 34-year-old Tom McCartney, who became Irish-qualified two years ago, even he has looked rejuvenated this season. His darts and scrummaging have been on the money, and he has been back to his old self in the loose.

Similarly, there are choices aplenty at scrumhalf, with John Cooney (check out those football skills) arguably the form “9” in the country, Caolin Blade’s performances have also come on to another level, and Kieran Marmion has to come back into the mix, even if Conor Murray is still the main man.

But in all of this, Kelleher could simply be a case of right place, right time.