Josh van der Flier: ‘You don’t want the last game, a loss, hanging over you’ 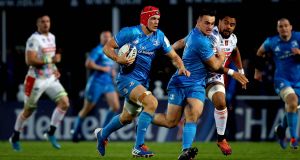 Josh van der Flier’s status as an Ireland international guaranteed nothing on his return to the province. Photograph: Ryan Byrne/Inpho

Josh van der Flier is content to indulge in some media shtick when reflecting on Jonathan Sexton’s try against Benetton last weekend. The tenet of the query was whether the flanker felt obliged to pass to the Leinster captain on the off chance that van der Flier might have been tackled short of the line.

He admitted: “At the time I thought I was going to get tackled, I didn’t realise how close I was but I was glad I passed because if I didn’t pass and I didn’t score that would have been bad news.” If it was anyone but Johnny, what option would you have taken? “I might have held it,” he chuckled.

The Leinster camp appears a relaxed environment this week ahead of what will be a very demanding test against the French Top 14 leaders, Lyon, at the Stade de Gerland. It’s not that the province’s bonus-point victory over Benetton at the RDS was blemish-free, far from it, but it is possible to discern a growing confidence in content and tone.

For the Ireland squad members it was an opportunity to shake the dust from the World Cup in what would have been a first game in Leinster colours this season for some, benefitting from the run-out and also the chance to reacquaint with team specific patterns and calls.

Van der Flier explained: “I suppose the moment we’d come home from the World Cup, all I wanted to do was play again because you always remember the last game and you don’t want the last game, a loss, hanging over you.

“It’s normally a Pro14 game you come back in for, obviously there’s a bit of pressure there, but Europe is a different level. I got two full weeks’ training leading in and that helped a lot. I felt comfortable enough but obviously I was maybe a small bit rusty with some bits and pieces but I felt good coming back in.

‘Into a nice gap’

“There was a good flow to the game. I thought we attacked quite well and managed to find a bit of space. I got a few carries in as well which was nice. It was just the way the game panned out. Rory O’Loughlin put me into a nice gap once and then Johnny (Sexton) obviously made a break and passed to me and I got it back to him. It was just one of those games when I ended up with the ball quite a bit so I was happy enough.”

“Teams will come up with things you’ve never seen before. They play better than you’ve ever seen before because it’s such a big deal, they’ve waited four years for it. I learned a lot that way and then I suppose it’s being around all the great players, spending time watching or playing against them in a World Cup, I learned bits and pieces from that as well.”

Van der Flier was asked whether there was more joy in playing for Leinster, a specific reference to style of play. “It’s hard to say, really. It’s definitely a greater honour to play for your country. Any time you’re wearing a green jersey is really, really special. I suppose there’s less of those ground-out, really-tight games with club rugby; (it’s) a bit more open. I enjoyed the World Cup as well but, yeah, it was good to be back in blue.”

His status as an Ireland international guaranteed nothing on his return to the province a fact of which he was quickly apprised on his return. Will Connors, in particular, and Scott Penny had both worn the number seven jersey with distinction in van der Flier’s absence, helping to ensure a six-game winning streak in the Pro14.

“It was one of the things watching the games, coming back from the World Cup, I was thinking over the last couple of weeks that if I don’t train at my best or put in a really good performance when I can then I won’t be playing, because the other lads would deserve it; they’ve been playing so well.

“It was one thing that Stuart and Leo said to me when I came back, that basically it’s expected that I’d have to perform because the backrow are all playing well.”

Leo Cullen: ‘It feels like it all came crashing down on top of us’ 15:41
Genoa’s Serie A match postponed over Covid-19 outbreak 15:25
Everton striker Dominic Calvert-Lewin among new names in England squad 14:36
2017 winner Ostapenko returning to form in French Open 14:15
Oisin Murphy denies taking cocaine after failed drugs test in France 13:55
Crossword Get access to over 6,000 interactive crosswords