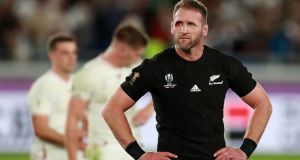 Some get to pen their own exits, be it Brian O’Driscoll to Derek Pender in our neck of the woods, or in Rugby World Cups most recently there was the All Blacks class of 2015, Richie McCaw, Dan Carter et al. But, after all, not even Steve Hansen, Kieran Read or Sonny Bill Williams will get to do so. Such is sport, such is life.

Regrets, the All Blacks will have a few, but the collective sense of disappointment within the All Blacks’ squad and New Zealand as a country will not be as painful as with previous ‘failures’.

This reporter can rarely recall coming across so many crushed sportsmen or women as was the case in the post-match mixed zone in Cardiff after their last World Cup defeat in quarter-finals against an inspired France. They were in a state of utter shock, mixed with a feeling of shame. Frankly, it didn’t seem commensurate with losing a game of sport.

But it had come on top of a superior Australia beating them in Lansdowne Road in 1991, all manner of forces gathering against them in Ellis Park in 1995, an inspired France producing the greatest World Cup comeback of all at Twickenham in 1999 before being mugged by Australia in 2003 in Sydney.

In a land where rugby is a way of life as much as a religion, the then head coach John Hart copped it good in the 1991 fall-out, and ditto in 2003 John Mitchell, which, as the intelligent and worldly former All Blacks hooker Anton Oliver observed, did not reflect well on some of New Zealand society.

Mitchell hasn’t coached in New Zealand for 14 years and on Saturday was the mastermind behind England’s semi-final virtual shutdown of the All Blacks’ attack.

Despite the many All Blacks achievements, they were being defined solely by winning a World Cup final. It became overbearing, and there may be a lesson (one of many admittedly) in this for Irish rugby. These things are relative, but Ireland cannot start judging every four-year cycle purely on winning a World Cup quarter-final. It really can become too all-consuming, for coaches, players and public alike.

Mind you, there’s another lesson for the departed Irish management and squad from the All Blacks on Sunday, as Hansen fronted up to the media having watched their semi-final defeat over again and singled out Maro Itoje. Now that’s how to face up to the music. Not slink off the next day without so much as a word.

Those All Blacks’ ‘failures’ made for 20 years of New Zealand hurt by the time 2011 came around on home soil. In truth, it nearly suffocated them again in the final against a French side in revolt with their coach, whom they’d thrashed in the pool stages. The All Blacks were blessed to get over the line by 8-7, thanks in part to Craig Joubert’s utter refusal to afford France a potential winning penalty in a long, drawn out endgame.

However, a huge weight was thereafter lifted from their shoulders. With one bound, the All Blacks were free. Come 2015, France felt their full wrath in the quarter-final (62-13) before they kept their nerve against South Africa and then Australia, even pulling away in the most free-flowing final performances of them all.

This time, they had the confidence to almost re-invent the wheel, changing tack on several fronts just a few months out in what was nearly their finest creation ever. They withstood the South Africa’s physical assault to put them back in their Boks, and a la four years ago against France, settled a couple of scores against Ireland in these quarter-finals.

In the bitter fallout to 2007 in Cardiff, Wayne Barnes became Public Enemy No 1. There is no ready-made replacement this time. There is pain aplenty, as Hansen demonstrated on Sunday, but this time there is also a widespread acknowledgement that the All Blacks were simply beaten by an outstanding England performance.

Although it was evidently no consolation to them, Hansen at least has the consolation of being the assistant coach in 2011 and head coach four years ago, while Read has, like Sam Whitelock and SBW, two winners’ medals. Read thus did not emulate Richie McCaw in captaining the All Blacks to the trophy, but he deserves to be held in the same pantheon. In winning his 126th cap on Saturday, he completed 80 minutes for the 104th time. Only McCaw can beat that.

Read maintains a mask in his press conferences, but is a deep thinker about the game and has been a very inclusive, unifying captain, as well as being a warrior. He will play with the Toyota club in Japan next season, and it is believed Hansen will take over there as well.

This All Blacks’ squad have nine 30-somethings who may, or may not, be around for the next World Cup, and even Beauden Barrett will be 32 in France. Read will take some emulating, but the likelihood is that Sam Whitelock, having taken over from Read as captain of the Crusaders this year, will do the same with the All Blacks.

Had the All Blacks won, the likelihood is that Ian Foster would have succeeded Hansen. He will still put his name forward, and is likely to bring Jamie Joseph and Tony Brown aboard. But after achieving so much at the Crusaders, Scott Robertson will also offer a compelling case, and would probably look to bring Brown aboard as well.

Either way, this defeat will fuel the All Blacks for the next four years, and they’ve long since removed that monkey from their back.