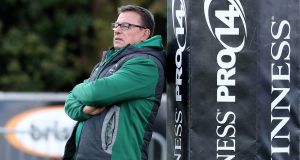 News of Kieran Keane’s impending departure comes as a surprise, and completes a rollercoaster sole season in charge of the 2016 Guinness Pro12 champions for the New Zealander.

Connacht’s farewell script for John Muldoon could not mask what has been a disappointing campaign for the western province, albeit it sent the vast majority of an 8,000-plus crowd away with renewed optimism for next season.

The final table tells no lies, and it finds Connacht only three points above last-placed Zebre in Conference A. Following on from last season’s difficult retention of the Guinness Pro12 title, when they finished eighth, the bald figures would suggest a season of further decline where others have improved.

In 22 games last season, Connacht won nine and lost 13, whereas this season in 21 games they won only seven and lost 14. Yet, helped by last Saturday’s try-fest over Leinster, they scored 53 tries, six more than last season, and conceded 54, which is seven fewer.

Only two teams in their own conference, and five overall, have conceded less. Their English-born defence coach, Peter Wilkins, is very highly regarded by the players, and brings with him a fair wealth of experience from his time with the Queensland Reds and Edinburgh.

Tellingly, Connacht’s number of losing bonus points doubled from three to six, which was more than any other team in the Pro14. Aside from the winnable European Challenge Cup quarter-final against Gloucester, amongst the ones that got away were a 15-17 defeat at home to Cardiff and a particularly galling 26-25 defeat away to the Cheetahs, not to mention their failure to register even one match point from their dismal two efforts against Zebre.

Connacht were hammering away for a win at the Leinster line in the RDS over the festive period, while the 18-10 defeat in Ulster largely hinged on one moment. The historic home treble, including those handsome 44-16 and 47-10 wins at the Sportsground over Ulster and Leinster, were undoubtedly the highs of an inconsistent season.

They played much of their best rugby in conditions such as last Saturday, or at altitude in Bloemfontein, or on all-weather surfaces. If only they could just dig up the Sportsground, lay a 4G pitch and construct a sliding roof . . .

Yet those performances provided hints they could become the quality side Keane believed they could become. Judging by his post-match comments he appeared to believe he would be the man to drive that process, and seemingly had little inkling that this would not be the case.

The dry Kiwi may come across as a hard taskmaster, and he’s clearly not the same kind of uber-positive Connacht salesman as Pat Lam. But then again, who is? More significantly, perhaps, his style of man management is rumoured to be quite different from Lam’s, and his departure is most probably not down purely to results.

In his own quirky way, Keane clearly cared passionately about Connacht. Indeed, everything about Keane’s persona and lengthy coaching career suggested he had the methods which could have borne fruit.

Keane’s brand of rugby is as enterprising as Lam’s, but it is less structured, and invests more responsibility on the players

Afforded three undistinguished years at the financially troubled Tasman Makos, Keane transformed them with a daring brand of running rugby which also proved hugely popular with their supporters. From next season on, the squad would have become more of his making. It will be interesting to see if the new head coach is appointed from overseas or from within.

Whoever takes over, the retirement of Muldoon will still leave a huge void. It would be too much to expect Robin Copeland to emulate Muldoon’s work, but he will bring a serious ball-carrying dynamic and physicality. It’s time for others such as Eoin McKeon, Eoghan Masterson, Jarad Butler and Seán O’Brien in the loose forwards alone, to emerge from Muldoon’s shadow.

Two former Australian under-20 internationals, 23-year-old David Horwitz, Rebels and ex-Waratahs, and the 25-year-old Kyle Godwin of the Brumbies, will provide more options at 10 and 12, although the squad still looks like it requires further strengthening.

Keane’s brand of rugby is as enterprising as Lam’s, but it is less structured, and invests more responsibility on the players. That was always liable to take time, and history shows us that these things do take time. Even Lam didn’t tear up trees in his first season, at the end of which they finished 10th in the Pro12, and seventh in his second before becoming champions in year three.

In Leo Cullen’s first year, Leinster lost five of six pool games in Europe and, although they topped the Pro12 table, were beaten by Connacht in the final before reaching both semi-finals last year, and now stand within three games of a double.

When Gregor Townsend took over Glasgow, they emulated their last season under Seán Lineen by reaching the semi-finals, where they again lost to Leinster, a fate that would befall them in 2013-14 in the final against the same opponents. They also finished bottom of their pool in Europe for the second year running. It took three seasons to reach their holy grail of a Pro12 final win over Munster, after topping the table, and a fourth season to make it into the European Cup knock-out stages.

In Wayne Pivac’s first season at the Scarlets, they finished sixth with a near-identical record to the year before, rising to fifth in his second year (when also losing all six pool games in Europe) before finishing third and winning the title last year as a precursor to reaching the European Champions Cup knock-out stages for the first time this season under his watch.

In other words, Townsend’s Warriors, Lam’s Connacht and Pivac’s Scarlets all won the League in their third seasons, as Cullen’s Leinster are aiming to do this season. There’s a pattern there, but it appears Keane is not being afforded that time.