Gerry Thornley: Leinster well on their way to a European dynasty 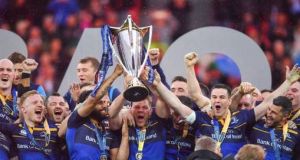 The triumphant Leinster team in Bilbao. There is no club or province in the world achieving what Leinster are doing. Photograph: Getty Images

Any given season in European rugby is merely a snapshot in history. Further evidence is required to justify talk of eras or dynasties. So it was that one win in six pool games two seasons ago can be viewed as a blip in Leinster’s European story, while also something of a starting point toward last Saturday.

Yet this fourth triumph is both a magnificent achievement for all concerned in its own right and also in establishing Leinster as one of the two most decorated “clubs” in European Cup history. Throw in a Challenge Cup, and they could lay claim to being the best.

By the same token, the three trophies of 2009 to 2012 contributed to the acute sense of disappointment two seasons ago, as manifest in Johnny Sexton’s pained and public regret that they had lost their culture. It’s what drove them, with help from Stuart Lancaster, to revive themselves. The three stars made five pool defeats unacceptable.

In this past successes in a tournament count for plenty. True, they can be a burden too, but for the most part having trophies in the cupboard inspires future generations. Title triumphs or cup wins become part of a club, province’s or even a national team’s DNA.

So it is that Real Madrid, for example, are back in a third successive Champions League final despite being the third best team in Spain. They invariably find a way in taut end games despite leaving little in the way of an indelible impression this season other than Cristiano Ronaldo’s overhead kick against Juventus and his “abs”.

When the club walls are decorated with framed photographs of past triumphs, of previous captains and his teammates holding aloft trophies, this imbues current players with the belief that they can emulate their predecessors.

It’s why the three stars on the Leinster jersey going into this season’s campaign drove the 37 players who featured in their European campaign to have a fourth embroidered into their jerseys.

It also contributed to the belief that they could do so. No doubt many of those who had been part of those triumphs have remained in varying degrees of contact with the current players, and probably inundated them with text messages in the days leading up to last Saturday’s final.

It helps, assuredly, when there are at least some players who have been there before. So it was that Sexton, Isa Nacewa, Cian Healy and Devin Toner could help pass on the baton with their own experiences and knowledge, as well as performances. On Saturday night it was striking how often the younger members of the squad, and the coaching staff, referenced the words of Nacewa and Sexton last week.

When they spoke not only would players have listened, but they’d have believed, because they were speaking from proven Cup-winning experiences.

Then there was also Leo Cullen, who along with Shane Jennings, were such driving forces in those three European Cup wins circa 2009 to 2012.

Alternatively, go too long without a triumph, ala Ulster and Munster, and perhaps there’s a bit more of a disconnect with those trophy-winning campaigns, and they become that little bit tougher for the existing squad to reproduce.

In addition to the quartet of four-time winners, only Rob Kearney and Sean Cronin of last Saturday’s squad had experience of playing in a European Cup final before. Tellingly, therefore, it was a first star, per se, for 17 of the match-day squad, not to mention all the others who contributed en route to the final.

Isa will be a loss, but James Lowe will be further inspired by him. Leinster can keep making good signings, they have a strong fan base, a rich conveyor belt and 10 of the match-day 23 were 25 or under. James Ryan, Dan Leavy, Garry Ringrose, Robbie Henshaw, Luke McGrath, Joey Carbery, Tadhg Furlong and Co should be around for yonks.

Although it has become more fashionable of late, only Leicester, Leinster, Toulon and Saracens have retained the European Cup. As for next season and beyond, who knows where the threats might materialise. John Fogarty on Monday referenced Exeter, Montpellier and Racing, while Saracens aren’t going away, Toulouse are back and Clermont may just be taking a breather.

Either way, last Saturday’s fourth European Cup was also a true provincial success. This Leinster represents more than D4. Their families played their part. In many instances, they are sons of club players.

They are also products of their club’s mini and under age structures, of hours and years of voluntary work by coaches and managers, and for sure also products of schools rugby, with relatively new providers such as St Michael’s and St Andrew’s supplementing more established rugby-playing schools like Blackrock College, Belvedere College, St Mary’s and others,

And with the Leinster academy fine-tuning increasingly ready-made professionals, it shows no signs of stopping.

All told, 18 of last Saturday’s match-day squad were in most instances born, and if not, then were effectively reared through the Leinster “system”.

Laurent Labit took umbrage at Cullen’s inference that Racing are a rich man’s team, even though Cullen never used those exact words, and it’s true that 16 of Racing’s match-day squad are French. But only four played for Racing’s under-18s, and only two are far from the Paris region.

There is no club or province in the world achieving what Leinster are doing. Granted, that the other provinces cannot keep up with them is problematic. Still, thousands of people could feel rightly proud of their contribution, however small or big, to last Saturday’s triumph.

It was a very Leinster European coup, and it’s why they’ve every chance of remaining contenders for years to come.