Ryan Baird joins up with Ireland squad for training 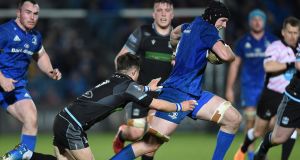 Leinster’s Ryan Baird evades a tackle from George Horne of Glasgow on his way to scoring a try during the Guinness Pro 14 game at the RDS. Photograph: Tommy Grealy/Inpho

Leinster’s Ryan Baird will train with Ireland for the early part of the week as a 35-man squad convened at Abbotstown to prepare for Saturday week’s Six Nations Championship match against France at the Stade de France.

Ireland had been due to face Italy at the Aviva stadium on Saturday but that game was postponed on Government advice due to coronavirus. Six Nations Rugby and its constituent members are in Paris as part of a World Rugby meeting, at which they’ll discuss the feasibility of fulfilling the remaining tournament fixtures in the current climate.

Baird, the 20-year-old secondrow, is fresh from his man-of-the-match performance in Leinster’s Guinness Pro 14 victory over the Glasgow Warriors at the RDS, a match in which he scored a hat-trick of tries, previously trained with the group as one of the ‘development players’ at a pre-Six Nations training camp in Portugal.

Will Connors was promoted to the senior squad while the other two development players were Ulster wing Robert Baloucoune and Leinster outhalf Harry Byrne, who started in the win over Glasgow. There are no Pro 14 fixtures this weekend or All-Ireland League club games for that matter.

Connacht duo – hooker Dave Heffernan and secondrow Ultan Dillane – will link up with Andy Farrell’s national squad upon their return from South Africa on Monday afternoon. The pair played their part in Connacht’s 29-19 victory over the Southern Kings in Port Elizabeth at the weekend.

Ulster’s Will Addison continues to rehabilitate a calf injury at his province while Cian Healy, who picked up a hip issue in the defeat to England, is working his way back to fitness at Leinster.