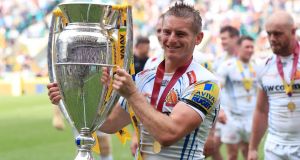 A thrilling Twickenham final saw the Dungannon man’s dramatic strike edge out Wasps 23-20, and meant Exeter were crowned champions of England for the first time in their 146-year history.

Exeter were a fourth division club when rugby union went professional 22 years ago, and they only arrived in the Premiership in 2010, which underlines the staggering scale of their achievement.

The game finished 20-20 after 80 minutes. Exeter led by 11 points approaching half-time, but Wasps’ pursuit of the Premiership title for a first time since 2008 was driven relentlessly by centre Jimmy Gopperth, the former Leinster player scoring a try and kicking two penalties and two conversions.

New Zealand-bound Lions squad member Elliot Daly also added a try, and Exeter had to dig deep after losing in the final to Saracens 12 months ago.

But Exeter dominated the additional 20 minutes in terms of territory, and three Steenson penalties – his winner arriving in the 97th minute – sent the Chiefs fans among a 79,000 crowd wild.

The Chiefs become England’s eighth different Premiership champions after Newcastle, Leicester, Wasps, Sale Sharks, Saracens, Harlequins and Northampton, and no-one could deny them their moment of glory in the Twickenham sunshine.

A minute’s silence was observed before kick-off in memory of the Manchester Arena bombing victims, while flags flew at half-mast on a sunny, breezy day in south-west London.

Much of the final’s build-up had been about the potential dominance of the Exeter pack, and those comments appeared justified as Chiefs gained two penalties inside the opening four minutes to pile pressure on Wasps.

And even when Wasps pilfered possession, they appeared nervous and edgy, which was underlined when outhalf Danny Cipriani kicked possession directly into touch and cost his team a possible attacking avenue.

Exeter were not to be denied for long, though, and they forged ahead when flanker Kai Horstmann won quality lineout possession, hooker Luke Cowan-Dickie burst clear in midfield and then Nowell finished brilliantly from 20 metres.

It was a try of stunning simplicity delivered at the highest pace, and Steenson’s conversion opened up a seven-point lead before a Gopperth penalty after 17 minutes got Wasps moving on the scoreboard.

Former Bath centre Ollie Devoto made the crucial break, crashing deep into Wasps territory, before Dollman cut a superb attacking angle and Wasps could not keep him out, with Steenson’s conversion making it 14-3.

But Wasps, totally against the run of play, struck on the stroke of half-tine by claiming a try as brilliantly delivered as it was unexpected.

Wasps had been under so much pressure, yet they suddenly found a way through Exeter’s defence when Cipriani found hooker Tommy Taylor before scrumhalf Dan Robson broke and Gopperth touched down behind the posts before converting his own try.

And it meant that Wasps trooped off just four points adrift, giving themselves a foothold in the final and delivering Exeter with a sharp reminder of their ability.

If Exeter were rocked by the score, it continued into the second half as Wasps went ahead for a first time when Hughes broke five tackles inside his own half, before wing Christian Wade was freed in space, and his kick and chase saw possession bounce kindly for Daly to finish off.

Gopperth’s conversion went over via the post, then Exeter saw Dollman limp off, and the final had taken a major unexpected turn with more than 30 minutes still remaining.

Gopperth and Steenson then exchanged penalties, and despite late Exeter pressure, it went to an extra 20 minutes, when Exeter prevailed.