From stationary carriers to centres of excellence - five things we learned 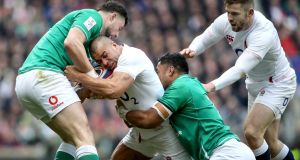 The nature of Ireland’s defeat will induce the greater levels of frustration and disappointment because the final score doesn’t accurately reflect England’s dominance.

Ireland were outthought, outfought and outplayed for large tranches of the Six Nations Championship match and were emphatically appraised of several shortcomings in performance terms both individually and collectively. There were exceptions to the general torpor but not enough to stem the whitewashing of Irish ambitions.

Losing to the World Cup finalists, England, in Twickenham wasn’t a surprise but for the third match in succession against Eddie Jones side, Ireland struggled to handle England’s sheer physicality, aggression in defence and tactical acumen. England proved during those series of matches that they are the better team and that Ireland haven’t, as yet, figured out how to close that gap.

England were able to easily identify the Irish ball carriers for the most part and with their aggression and line speed allowed them to shut down their opponents behind or on the gain-line, generally speaking with two-man tackles.

The issue has been flagged periodically in previous performances that Ireland come unstuck when lacking effective ball carrying options in that respect, a point that was endorsed further by the contrast when players like Ronan Kelleher, Ultan Dillane and Caelan Doris were sprung from the bench in the second half.

There is always going to be a little more latitude in terms of space in the final quarter of the match but the footwork, fight and leg drive of the reinforcements allowed Ireland to get some much needed go-forward ball and Andrew Porter’s try was a direct consequence of that effectiveness.

Stationary carriers and a slight disconnect in support terms were other issues that surfaced. Andy Farrell will need to decide the balance to be struck in personnel and structural terms to get his side over the gain-line with greater regularity.

The variety and nuance in England’s kicking game caused problems for their opponents all afternoon and not just in yielding a couple of tries because they were largely down to player error. The knock-on effect though was getting Ireland’s defensive line to pause for a nanosecond, thereby facilitating the home side if they wanted to play in the wider channels, carry hard over the gain-line, initially through Manu Tuilagi cutting back towards the 10 channel or indeed employ several kicking options.

In contrast the visitors’ kicking game was largely poor and misdirected. Ireland have long prided themselves on their aerial ability but here too they came off second best.

Communication underpins cohesiveness and there were times when it was noticeably absent from an Irish perspective. When England did kick long with no pressure on the fielder it was striking how often say, Jordan Larmour was left to his own devices in deciding whether to run ball back or kick. There needs to be a greater hustle to get back and support him and to offer options because then his running threat comes more into play when the opposition have more than a solitary focus to occupy them. He will be disappointed that he didn’t mark the ball ahead of England’s first try but he’s a young player who is learning how to become a test fullback.

Andy Farrell and the coaching group are just three matches into their tenure and trying to discover the personnel and patterns that offer the best opportunity of success going forward, all the while trying to excel in a ferociously competitive Championship.

Ireland have two matches left, against Italy and France, and even though they still harbour thoughts of winning the tournament, there is an argument that creating a playing identity that will sustain them beyond the short term, in relation to players and style can ultimately lead to the greater reward. They’re not mutually exclusive goals progress should not always be defined by a table.

Bundee Aki and Robbie Henshaw were very effective in different facets of the game with the former excelling in defence and on more than one occasion saving his side from a definitive line breach. Henshaw was starved of decent possession in attack but what little he did get, he maximised and not just for his smartly taken try.

Placing the result to one side, the performance of Noel McNamara’s Ireland Under-20 side in their victory over England at Franklin’s Gardens was a joy to behold, principally for the manner in which they played the game. Opposed by a physically heavier side, the young Irish players backed their skill-sets, ran hard onto the ball with energy and dynamism and never stopped looking to play a compelling brand of heads-up rugby, that was as effective as it was entertaining.