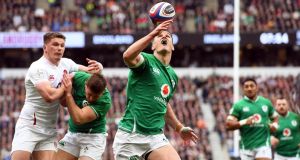 England are back in contention for the 2020 Six Nations after Sunday’s crushing win over Ireland. Photograph: EPA

Redemption day; Eyes on the prize; Turbo-charged England back to their best; England land a KO to rekindle Six Nations bid.

A selection of Monday morning’s back page headlines - the English press reaction to Sunday’s dominant 24-12 win over Ireland reflected a refound Anglo-confidence in their chances of winning this year’s Six Nations championship. And rightly so.

Defeat to France on the opening day, before being pushed all the way by Scotland in round two, had left Eddie Jones and his team under pressure. Throw in the Saracens’ farrago, the controversy over cuts to the English Championship, and a number of questionable comments and selections by the English head coach - and it’s been a tricky few weeks for English rugby.

“This was England’s reboot moment,” explains the Daily Telegraph’s Micky Cleary. “There was a need for a cleansing of the system, a restoration of the feel-good vibe that had sent the team on their way to Japan five months ago. Only a victory such as this can do that.”

Former World Cup winning head coach Clive Woodward, admits he was “expecting a torrid dogfight against an Ireland team with their tails up and nothing to lose and I even felt the Irish might shade it by a point or two. I was worried about some of the England selections and nervous about the result.” In his column with the Daily Mail, Woodward has no explanation for why Ireland then arrived at Twickenham without that forecast fight: “Ireland just weren’t there mentally in the first half and I can offer no explanation other than it does sometimes happen. Rugby is often an art more than a science, if it was the latter you could come up with the answers every time.”

Much of the English analysis of Ireland’s poor performance centred on their captain and outhalf’s day to forget.

“At times, it seemed like Irish fly-half Johnny Sexton had been replaced by the cardboard cut-out that England keep in their team dining room,” writes Nik Simon of the Daily Mail. “Not only did Sexton lose the collisions, he even lost his boot. At one point in the first half he slipped over while running around in one sock, before being clattered by Sam Underhill. ‘Calm down and follow the ball,’ blasted Jaco Peyper after the frustrated Irishman complained to the South African referee. Sexton was rattled and, from an English point of view, it was mission accomplished.”

In the Guardian, Gerard Meagher writes that Sexton’s torpor typified Ireland’s off-colour performance providing a dose of realism: “it would be the most extreme of overreactions to suggest his days in the No 10 shirt are numbered, not least because he is Farrell’s captain. You could not help but think that it was a glimpse into the future however, when Ross Byrne, his Leinster teammate and 10 years his junior, came on and slotted in a fly-half. The match ended with Byrne dictating things and Sexton lurking out on the left, hoping for a consolatory late score after a forgettable afternoon. It did not come – on days like this they never do.”

The criticism of the Leinster outhalf continued across the player ratings sections: “A day to forget: started on the back foot and stayed there. Dreadful goal-kicking - 3” (Guardian). “Horror show. Dropped ball for Ford’s try, shanked easy penalty, gave away penalty for 17-0, shanked conversion attempt - 4” (Daily Telegraph). “Moans at the referee, drop for the first try and shoddy kicking – even lost a boot once to sum up a bad day - 4” (Daily Mail). “Responsible for England’s first try after fumbling and dropping Young’s kick into Ford’s path - 5” (The Times).

As for themselves, well England are now preparing for Wales and with that a revitalised Championship bid. “England’s pack will want to keep Wales deep in defence as they did Ireland,” writes Stuart Barnes in The Times. “That’s the ideal way to secure a solid performance from the back three. England will kick a lot, they will attempt to bully Wales on the back foot. If they succeed as they did against Ireland, expect Elliot Daly, back in his best position, and the makeshift Jonathan Joseph to shine and England to win.”

While in the same pages, Robert Kitson rubs salt in the wounds in his match report: “If Ireland had hoped that inviting Bono into camp during the build-up might pay on-field dividends they were sadly mistaken. The only U2 track that sprang to mind in the end was Sunday Bloody Sunday.”

Looking ahead to the final two rounds of what’s beginning to look like a thrilling end to the 2020 Six Nations - Tom Cary is looking at its conclusion from an Irish perspective. Writing in the Telegraph, he asks was Sunday a blip or slip into old ways: “the question remains: does Andy Farrell stick with the old guard? Or does he wield the axe, build a new team around some of the province’s young blood? One thing is for sure: the honeymoon period is over.”