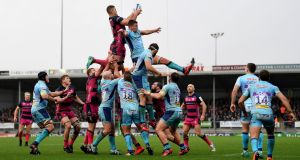 With Gloucester trying to overhaul Munster at the top of Pool Two, Exeter go into Friday night’s contest between the two English sides knowing their misfiring Heineken Champions Cup campaign will fizzle out if they fail to win.

Despite losing just once in the English Premiership this season, Exeter have failed to win from their three Champions Cup starts. Last Saturday’s home defeat against Gloucester left them adrift at the Pool Two basement.

And even bonus point victories over Gloucester, Castres and Munster - two of those games, including the trip to Thomond Park, are away from home - between now and mid-January might not be enough to progress.

The likelihood is another pool stage exit for Exeter, although they are not giving up the ghost. “As I’ve said before, the Heineken Champions Cup has lots of challenges,” Chiefs rugby director Rob Baxter said. “If you want to win it, you have to try and learn something from every game you play in.

“We not only have to keep the competition alive, but we have to learn from the games and commit ourselves for the full 80 minutes. What we actually have to do is use the disappointment of last weekend to make us better as a team, because there are still three rounds left and 15 points to get.

Baxter, though, will be without a number of players against Gloucester, with England centre Henry Slade and former Wales wing Alex Cuthbert among new additions to Exeter’s injury list.

Gloucester are second in the group, three points behind Munster who are not in action until Saturday evening, and head coach Johan Ackermann said: “It will obviously be good for our campaign to back up last week with a win and give ourselves a possibility of progressing in the competition.

“But, having analysed the game, we know that it’s not going to be easy, there is still much for us to improve on and a lot of hard work we need to do.

“We also know that we will be up against a side who are very motivated to bounce back.”