Paddy Jackson to start against Connacht on Friday night 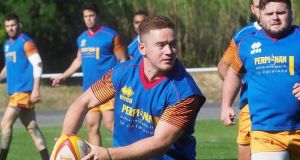 Paddy Jackson will play in Perpignan’s Challenge Cup match against Connacht in France this weekend.

The former Ulster and Ireland outhalf will start in the number 10 jersey at Stade Aime Giral. Jackson, capped 25 times by Ireland until the IRFU revoked his contract earlier this year, has been linked with a move to Lyon at the end of the season if Perpignan, rooted to the bottom of the French Top 14, are relegated.

Joyce is retained in the midfield following his debut in the win over Perpignan last weekend while Fitzgerald is also set for his second start having been previously handed the number 10 jersey against Sale Sharks in October.

Joyce and Fitzgerald come into a back line that shows a blend of youth and experience. Joyce will partner David Horwitz in the midfield as the Australian makes a positional switch from outhalf where he played last week.

In the back three, Darragh Leader is retained at fullback, as are wingers Matt Healy and Cian Kelleher.

In the pack, hooker Dave Heffernan captains the side again with the Ballina native joined by props Peter McCabe and Dominic Robertson-McCoy in the frontrow. In the secondrow, James Cannon comes into the side as does the impressive Gavin Thornbury.

In the backrow, Robin Copeland returns from injury to start at number eight, alongside Sean O’Brien and James Connolly who played the full 80 minutes in the win in the Sportsground last week.

Connacht go into the game against Perpignan with four wins in a row in all competitions, and Friend says it is important to keep that momentum going ahead of the Christmas interpro series: “We have gained some real momentum with four wins in a row that included our back to back victories in South Africa. It was important to get the win over Perpignan last weekend to keep our interest alive in this competition, but we know that the return fixture will be a completely different game.

“Perpignan are in search of a win and the longer they go without that win, the more dangerous they are. They are a different proposition when they are playing at home and we will need a huge performance to challenge them.

“We have selected a blend of youth and experience in our side. We are seeing strong competition within the squad and that is hugely important as we head into the second half of the season. There are a few academy players in our match day squad again this weekend and that has been a feature of our selections this season. Conor Fitzgerald, Kieran Joyce and Matthew Burke have performed well when called on so far and that is why we have selected them again”.

Matt Williams: Ireland’s strategy of ‘heads up attack’ will not work without strategic thinking 05:00
France agree to travel to Dublin for final Women’s Six Nations game 05:00
Fifty days to rediscover the 2020 Championship – with apologies to Paul Simon 05:00
Shellshocked Ireland left to reflect on a self-inflicted defeat 22:41
Solskjær defends media ‘target’ Mason Greenwood 22:31
Crossword Get access to over 6,000 interactive crosswords