Wasteful Leinster brought rudely back down to earth 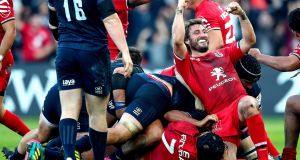 Toulouse’s Maxime Médard celebrates as his side win a late peanlty to effectively end the game against Leinster at Stade Ernest Wallon, Toulouse. Photograph: James Crombie/Inpho

A week is a long time, and all that.

Things were always going to get tougher in round two, but even so yesterday’s third Irish defeat of the weekend – Leinster losing 27-21 in Toulouse yesterday – was certainly the most unexpected given the recent standards of the Heineken Champions Cup holders, and not least nine days ago when eviscerating Wasps.

L’Equipe had speculated that Toulouse would almost have to play the perfect game to end Leinster’s ten-match winning run in the competition dating back to Clermont’s victory over them in the semi-finals two seasons ago.

In the event, Toulouse didn’t have to play anything like perfectly. Although reverting to their young, home-grown roots and a willingness to attack from anywhere, they were always going to be living off scraps. But Leinster were so generous with them that Toulouse gorged themselves heartily.

Ultimately, having recovered from an early 14-0 deficit to lead 27-21, Leinster’s 15th turnover of a wasteful performance led to a stunning 80 metre turnover try finished off, for his second of the match, by Maxime Medard.

Whatever about the hype around them, Leinster certainly scaled the heights last week, which Leo Cullen felt may not have been unrelated to this comparatively loose display.

“Ah, the hype is the hype,” he said dismissively.

“It’s not something that we can really control. For us there were lots of things in that game we can control better, and we just didn’t quite fire. We need to understand the challenge of what coming away to France is, and when you come off the back of a big win sometimes you develop some poor habits and we need to make sure that if we win a game well that we’re not developing bad habits and ‘behaviours’.

“I think maybe one or two did creep into our game today, for whatever reason. We talked about it a lot but we didn’t quite execute enough, but again that’s the learning. Guys will be better for the experience.”

Their only injury concern was Josh van der Flier, who was removed after suffering a knock to the head without recourse to an HIA.

“He just had a section one, so he took a bit of a bang and had a bit of a stumble when he came up, so that’s just a straight removal for him,” said Cullen. “Other than that, just a few bangs and knocks – we haven’t got a full medical update yet. It was pretty physical out there.”

It was also noisy. The Stade Ernest Wallon was still rocking long after the post-match sunlight gave way to darkness, and this was also a reminder that Leinster’s status makes them both the biggest draw and the biggest scalp in the competition.

“There were disappointing parts of the game; the first 20 minutes and the last few. That’s what pressure does to you. If you are a little off your game then you do things you won’t usually do. They had a lot of pressure on us and if you’re a little bit off then that tells.

“I thought it was an unbelievable occasion. It is a special competition. You can see what it means to teams and to Toulouse today. Maybe it will spark something in our players’ minds as to what it would be like if we were to lose one or two more games in the competition.”

All that said and done, Cullen conceded that “it definitely feels like one that got away” and “a little bit of a lost opportunity”.

Indeed. Leinster could have taken a stranglehold on Pool One. Had they completed their push for a fourth try, they’d be sitting six points clear of the other three teams. Instead, they sit second on six points, two behind Toulouse, and two ahead of Bath, whom they meet at the Rec and the Aviva in December, with Wasps not out of the running on three points.

As well as having less elbow room, unlike yesterday Leinster will not be on a run of games but instead will be reassembling after the four-Test November window.

“Now we play Bath back to back and both teams are going to be scrapping for everything, and we need to try and get it right,” said Cullen. “We need to make sure we’re clued in when we come back together again. The challenge is that it’s such a break now.

“It’s almost like there’s a little bit of a parting after next week, and then the group comes back together for the next two games in Europe. That’s a challenge for us, and one we need to get our heads around at some point.”

As for the sole Irish win, rarely has a Munster bonus point win in Europe at their Thomond Park citadel seemed so anti-climactic as was their 36-22 victory over Gloucester on Saturday. It wasn’t just that it was facilitated by Danny Cipriani’s 28th minute red card, or that Munster lost their way in the final dozen minutes, more that Tommy O’Donnell, Rhys Marshall and Dan Goggin suffered serious injuries.

O’Donnell suffered a broken leg, Marshall a leg injury which could mean an extended absence and the in-form 23-year-old Goggin sustained a bad knee injury due an accidental clash of legs in the very last play of the game.

An understandably downbeat Johann van Graan said: “It is a big loss only eight weeks into the season with three starters that go down like this; it is worrying from our side.

“We talk about player welfare but the game is becoming more and more physical and guys gets shots. Three injuries from our side and I don’t know about the other side but their hooker [Franco Marais] looked like he was in quite a bit of pain when he came off.”

Munster’s options at hooker and centre, where Jaco Taute and Chris Farrell are also sidelined, look decidedly thin. Niall Scannell was sidelined with an ankle injury which van Graan estimated would require “another week or two”, which makes Scannell doubtful for Ireland’s opening November Test against Italy in Chicago two weeks hence.

Scannell started the second and third Tests in Australia in the absence of Rory Best, but the Irish captain is primed for a return after completing his third comeback game for Ulster in Saturday’s 44-16 defeat.

Despite the result, Best believes Ulster are making progress.

“I know I was late back but I got a good block of work before this. I felt my game was going really well. I was a wee bit frustrated with some of the set-piece stuff,” said Best in relation to Ulster’s difficulties in the scrum and lineout.

“Look, I don’t think it was all down to me and it’s the same when the lineout goes well, that’s not all down to me-. They competed really well and put good pressure on. Going into the autumn, we’ll get one more game now next weekend ahead of the series and I think it’s exciting.”

The uncapped Will Addison, whom Best said “has been fantastic these last two weeks”, is likely to feature in the Irish squad.

1 Cheltenham faces criticism after racegoers suffer Covid-19 symptoms
2 Coronavirus crisis could cost the GAA up to €60 million
3 Ian O’Riordan: Learning to run for the first time all over again
4 Cycling Ireland thrilled with take-up for Zwift League series
5 The top 25 Irish players to play in the Premier League era
Real news has value SUBSCRIBE