The Offload: Owens takes Zebo to task for finger-pointing 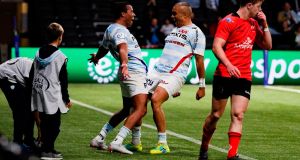 Let’s unpick the chilling moment in full. There are 75 minutes in the bank and Racing 92 are 37-12 to the good when the exiled artist , not unlike Joyce and Beckett stranded by La Seine, transforms La Défense Arena into a nightclub. There are showgirls in the corner where Zebo finishes. One of them scatters but, fear not, Zeebs applies the brakes. Party time.

Hang on. Big Stu McCloskey wades into the Racing pool to give Zebo a dunt.

Zebo, who passionately defended the showboating of Freddie Burns, pointed at Lowry before strolling over. Owens is merely protecting the values of the game we should all work to uphold on a daily, no hourly, basis.

“I suggest you apologise.”

Too late. This is already an international incident. Finger-pointing may be allowed in Saudi Arabia consulates but not on Nigel’s watch.

Joe Schmidt’s selection policy is mentioned (such behaviour is why Zebo will never wear green again!).

This. Is. Definitely. Not. Soccer.

“Keep the game’s values,” adds Nigel before his flight to Oslo.

People from all walks of life come out in praise of Zebo, who subsequently addresses his former nation: “I wouldn’t like my kids to do something like that. You live and you learn. I apologise to the kid. He’s a great kid, a great player. I gave him my jersey and apologised as much as I possibly could.”

Can a club owner turn back time? Perhaps save Freddie Burns from himself?

Bruce Craig actually has a point. Bath were robbed. The millionaire, as is his right, wrote a letter saying as much. He spoke about the unforgivable error of calling the Toulouse game before time had full elapsed.

Bath were two points down and should have been given this final opportunity in, yes, the same affair that will always be remembered for the coffee Burns and Maxime Medard shared the day before.

“I think the game should be replayed,” said Craig, who is reportedly worth £300 million, “and we will do what we can to get equity.

“This is the European Cup, there are massive sporting and financial implications. Bath have been majorly disadvantaged.”

Bruce was not done. Toulouse pair Jerome Kaino and Lucas Pointud were subsequently cited and suspended for dangerous shots which prompted Craig to unload heavy criticism on referee Andrew Brace.

“In terms of his gross negligence, the referee is endangering the player.”

Craig wants a replay for a game most Bath people would rather forget.

Compromise: ECPR should redo the last few seconds. Not only the lineout that never was but start from the moment Burns is about to blow the kiss of death. Or, if possible, go back to the coffee shop the day before. Stand him up, Freddie. It was all a dream.

Johan Ackerman is not helping.

“My view is simple,” said the Gloucester coach.”It’s spoiling the game if there’s no intent. I’ve got a lot to say, but I’m not going to say it. It’s not going to change anything.”

That’s plenty, Johan, whose frustration centred around Danny Cipriani’s red card for a tackle devoid of any technique.

“He didn’t even want to tackle the guy; he wanted to get out of it.”

Certainly looked that way but “shoulder directly on the face” is a red card. Referees are being forced to punish this action in order to save the game. To save the entire sport of rugby.

“You’d like for a bit of common sense to be brought in in this situation,” said Shane Jennings on Virgin Sport. “There clearly isn’t intent.”

Intent must remain irrelevant if rugby is to survive. Tackle technique is ingrained. Coaches like Ackerman will only alter a team’s attitude when it is forced upon them. That’s why Billy Twelvetree’s should have walked for high hitting Joey Carbery.

Then Ruiz let Twelvetrees off with a warning.

This feels like the tipping point. If that is the right decision Ruiz must be defended, if not it must be publicly noted.

“There is no consistency,” Ronan O’Gara observed.