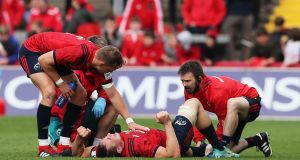 It was something of a Pyrrhic victory for Munster following their 36-22 win over Gloucester in a feisty Heineken Champions Cup encounter at Thomond Park as head coach Johann van Graan confirmed that Tommy O’Donnell, Rhys Marshall and Dan Goggin suffered serious injuries during the match.

O’Donnell, who has had a ridiculously unfortunate run with injury, suffered a suspected broken leg just before the interval while Goggin sustained a bad knee injury in the final play of the match – he missed five months at the start of last season with knee damage – and Marshall’s upper leg problem is not short term in rehabilitation terms.

“It is a big loss only eight weeks into the season with three starters that go down like this; it is worrying from our side. We talk about player welfare but the game is becoming more and more physical and guys gets shots. Three injuries from our side and I don’t know about the other side but their hooker looked like he was in quite a bit of pain when he came off.”

O’Donnell’s been dreadfully unlucky with injury and if confirmed it will leave a sour taste for the flanker on the week he signed a new two-year contract with Munster. Goggin was sidelined for five months from September 2017 with a knee injury and looked in a great deal of pain being helped off the pitch.

The game was overshadowed by a flurry of cards, the most pivotal the red one doled out to Gloucester outhalf Danny Cipriani after 28-minutes for a high tackle on Munster centre Rory Scannell. The attempted tackle was poor technically rather than malicious but there is little wriggle room in any literal interpretation of the law, which is very much in vogue these days.

Gloucester coach Johan Ackermann refused to comment specifically about Danny Cipriani’s red card but did muse on the basis of the interpretation that ‘do we want to see 14 against 15 all the time?’ He continued: “I’m not going to get involved in a debate about red cards.

“Before the season started, I gave a statement in Gloucester on my opinion about red cards. So I’m not going to get involved. My view is simple; it’s spoiling the game if there’s no intent. I’ve got a lot to say, but I’m not going to say it. It’s not going to change anything.

“(Danny) is disappointed. If they come and watch how he trains, that’s how he protects himself. It’s a normal habit, he didn’t even want to tackle the guy; he wanted to get out of it. It’s done and dusted, if the supporters come and pay to watch 14 v 15; that’s a great way for rugby (to go) forward.

“The law protects the player, sometimes it’s what we call an accident. If you hit your car it’s an accident, you don’t plan for it. Get on a plane, maybe it’s going to fall. Some back rowers make 25 tackles in a game, they get one wrong and now they say he has bad technique. What about the 24 great tackles?

“We can debate this over and over. The biggest thing, I say, is: do we constantly want to see 14 play 15? I don’t know. I’m just proud of the boys the way they performed tonight,” he said, rightly praising his players who scored three of the last four tries in the match.

Gloucester secondrow Tom Savage also received a yellow card – Billy Twelvetrees escaped one when crashing into Joey Carbery – while Munster’s Sammy Arnold and Stephen Archer were both sent to the sin bin late on, the latter for a high tackle around the neck.

Van Graan had sympathy for his counterpart. “I must go and have a look at all those clips. The letter of the law states that if you make shoulder contact with the head you are in a bit of trouble. There were quite a few high shots.

“The high tackle has been penalised forever in the game. It has never been allowed. It’s not like guys are starting to do it now. There a guys with good footwork out there who put you off balance and nine times out of 10 it is a genuine accident.

“As Johann said by the latter of the law if you are upright and high then you are in trouble. It is in the spotlight for rule changes at the moment. No one has ever practiced high tackling.”

Munster will take a two point advantage at the top of the pool when the Champions Cup resumes in December and van Graan will hope that the Pro14 brings no fresh injury headaches.