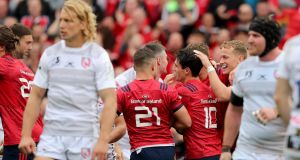 A Pyrrhic victory when weighed against the serious injuries suffered by Tommy O’Donnell, Rhys Marshall and Dan Goggin, but a five-point haul nevertheless for which Munster head coach Johann van Graan will be grateful in reflecting on the substandard aspects of the performance.

It was an afternoon of fitful quality from a Munster perspective, collective carelessness at times bailed-out by individual excellence.

Tadhg Beirne produced another colossal shift, a relentless nuisance at the breakdown where he pilfered possession. Jean Kleyn thundered into tackles and was no less ferocious in his carrying, Peter O’Mahony, James Cronin and CJ Stander also hard-working and for the most part diligent.

When Munster’s need was most acute, Joey Carbery was invariably the catalyst, demonstrating some gorgeous sleight-of-hand in his range and timing of the pass and his ability to seek out space and attract multiple tacklers, was the essence of his team’s creativity.

The bench, particularly Alby Mathewson injected some zip into the home side, the replacement scrumhalf facilitated by the production of quicker ruck ball.

Mike Haley was a bright presence at fullback and until his replacement Rory Scannell was superb in straightening the backline and offering positive gain-lines.

The home side racked up the four-try bonus point by the 55th minute in a contest that had been defined in the 28th minute by Gloucester outhalf Danny Cipriani’s sending off with tries from Haley, Rhys Marshall, Carbery and replacement centre Sammy Arnold.

While they would score a fifth, through Andrew Conway, it was the visitors who deserve the kudos for the manner in which they not alone refused to buckle but dominated the final quarter on the scoreboard.

They scored three tries through replacement and Munster old boy Gerbrandt Grobler, Jason Woodward and the outstanding Ben Morgan, and were very much in the hunt for a fourth and a bonus point as a 13-man Munster tried to survive those final few moments. Gloucester will be a different prospect when injuries ease and the Irish province head for Kingsholm in January.

On the debit side of the ledger from a Munster perspective is a poor set piece return, seven lineout wins from 11 throws on their own ball, two of which were attributable to the intended receiver not getting into the air.

There were elementary errors, handling and decision making, poorly judged grubber kicks that were blocked down and brittle ball retention but what may disappoint Munster Van Graan most is the 16 penalties that the team conceded.

It’s a whopping total and that rank indiscipline would have been injurious to their hopes on another day.

Without the benefit of reviewing the match footage, van Graan admitted: “We want to keep it [penalty count] as low as possible; we’ve got certain standards for ourselves. I think it’s the most we conceded in a while. [A] few at the lineout, [and then] scrum interpretation, there was a lot going on in the scrums which I’ll have to go and have a look at.

“I thought in broken field we actually did some really good stuff. We didn’t start the game well, the first 13 minutes, losing a few lineouts in terms of communication, but that happens in the game of rugby. I said it from the very first day, that’s why you get a season, you go through all these things and you’ve got to learn as a team.”

He did bemoan the more obvious transgressions, the ill-discipline, being caught offside while also praising his team for not reacting to niggle in what was a periodically feisty encounter, particularly in the opening quarter.

Ultimately though Munster claimed the five match points while denying Gloucester any and van Graan reasonably pointed out: “If you told me two weeks ago we’d be sitting top of the group after two rounds, I’d take that.”