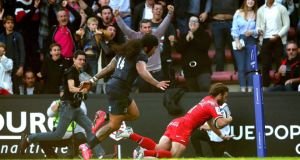 Toulouse’s Maxime Médard runs in to score a try during their Champions Cup win over Leinster. Photo: James Crombie/Inpho

Toulouse are nothing like the force of old, and this one will have rankled with Leinster all the way home and into next week, but the once illustrious four-time winners rolled back the years to beat the current champions and four-time winners thanks, in the main, to their off-the-cuff rugby. In some respects, their win made little sense, but their match-winning try was decidedly that, and worthy of winning any game of rugby anywhere.

It was a thrilling, 70th minute, turnover try involving four players who linked intuitively. Their ability to transition from defence to attack had seemed their best chance, and so it came to pass. If nothing else, they rose to the occasion and also deserved their win simply for holding their nerve and riding the crest of the many waves in a fluctuating game.

The sun had come out on a previously grey day almost seconds before kick-off and remained, drenching a near capacity 17,852 crowd that refused to go home and cheered a lap of honour as if they’d won their fifth title. The Stade Ernest Wallon was rocking like the old days.

On a gluey, heavy pitch, and with Wayne Barnes in one of his inconsistent moods, Leinster never sorted out their problems at the breakdown, which was the kernel of their problem. They also forced too much, and missed too many tackles.

The visitors began edgily, and their ball retention was unusually poor. Combined with missed first-up tackles, this gave the home team hope and energy, and whenever the holders threatened to gain a grip, they invariably released it again.

From the off, James Lowe put his arms around Cheslin Kolbe in the air to the game’s first box kick. This enabled Thomas Ramos to give Toulouse an early lead and after Henshaw compounded a spillage when hit hard by Romain Ntamack by going off his feet, Ramos doubled the lead.

Leinster were out of sorts. Kolbe, as he does, stepped McGrath and Josh van der Flier wickedly, before Larmour ignored a switch with Lowe to isolate himself, and his loose offload was fumbled by Garry Ringrose.

Leinster again overplayed their hand after McGrath sniped and offloaded to Larmour, but when Cronin took the fullback’s offload and did so himself, the intercept was picked off by Alban Placines and he gave 23-year-old skipper Julien Marchand a gallop upfield. After a customary step and cut by Zack Holmes was stopped in its tracks, Sébastien Bézy threw out a long pass for Maxime Medard to step Joe Tomane and score.

The unlucky van der Flier was forced off for a HIA – which he subsequently failed – to be replaced by Seán O’Brien, who was immediately influential with some good clear-outs, touches and carries, and seemed to bring a calming, experienced presence.

Yet that l4-0 lead might have become 21-0 when Kolbe picked off Larmour’s pass for what would have been an intercept try but Wayne Barnes had already signalled a penalty for offside and, instead, Sexton finally opened Leinster’s account. When Joe Tekori was finally pinged for not rolling away it seemed important, for Leinster’s game plan was predicated on quick ball. Sexton made it 14-6.

Suitably encouraged, Leinster probed some more off a lineout, and Jack Conan beat the tackles of Clément Castets and Marchand, dummied Kolbe and took Ramos’ tackle for the supporting O’Brien to score. Sexton made it a one-point game.

Toulouse were seemingly going nowhere only for Selevasio Tolofua to step O’Brien and free Sofiane Guitoune, who then stepped Larmour to score, and the conversion by Ramos left it 21-13 at the break.

Two early turnovers at the breakdown didn’t help but when Kolbe was pinged not so much for not rolling away as rolling over the ball, and Marchand conceded another 10 meters. Leinster went through the phases from their regular starting point in the left corner – Toner, Healy and O’Brien carrying hard before Cronin took Sexton’s inside pass to beat the tackle of Charlie Faumuina and take the tackle of Holmes to score under the posts.

For once the Stade Ernst Wallon fell fairly quiet. But not for long, Tolafua countered from deep, as any Toulouse player has now been reconditioned to do, and Yoann Huget, on for Ntamack in the first-half, latched onto a grubber by Holmes, and then Kolbe was denied a try by Lowe from another.

But soon Henshaw was finding a huge touch, before Leinster were going back to that favoured left corner of theirs. Although the lineout drive was held up, Leinster patiently picked and jammed, O’Brien having the penultimate rumble before a quick recycle enabled Ryan, with Ruddock and Furlong latching on, to go over with a fairly unstoppable drive. Sexton converted.

But Toulouse were far from done. Antoine Dupoint, notionally a scrumhalf, but again operating as a replacement outhalf in a brilliant cameo worthy of Freddy Michalak, nearly scored of his own chip when released by Medard. Cue chants of “Tou-Lou-Sain, Tou-Lou-Sain.”

And when Leinster came knocking for the match-sealing bonus point try, the game was turned on its head by a fabulous turnover try from deep. Louis Madaule read and picked off Luke McGrath’s pass from the base and dummied one before releasing Huget. He made more ground, and linked with Bézy, whose final pass may have been forward but there was no doubting the quality of the try as the winger scored in the corner. Holmes even converted from the touchline.

Now the chants were deafening, and Toulouse had renewed energy.

Leinster began as they finished – clearly rattled. After Holmes missed a penalty, a lost Leinster lineout meant it was Toulouse who went to the corner in search of a fourth try.

They were repelled, but after Kolbe gathered one final up-and-under by Sexton and ran down the clock with over a minute of one off recycles, Barnes decided he’d ping a Leinster player. In truth, it could have been any of about four from each side.