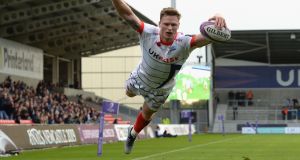 Chris Ashton of Sale Sharks dives in to score his third try of the match during the Challenge Cup match victory over Connacht at AJ Bell Stadium. Photograph: Tony Marshall/Getty

While not a huge surprise given Connacht’s European history, and the need to rest key players, it was still nonetheless disappointing given Connacht had their chances and had kept pace for the opening half.

“Frustrating,” said Andy Friend. “At-13-13 I thought it was probably a fair reflection of the first half. I felt we could have upped the tempo a little better, we had more running in our legs than they did, we felt it was probably one of the slower games, but we made a couple of crucial errors and we were not quick enough to fix things.”

However, within five minutes Sale had capitalised on a turnover in midfield, and with the Connacht defence stretched, Chris Ashton strode over for the first of his hat-trick in his first competitive outing after returning from a pre-season suspension. De Klerk levelled with the conversion.

“There were probably two – the one before half-time, and then one after half-time – they are periods we have been looking at in our game, making sure we close out the half better than what we did again today, and how we start in the second half.”

With their tails up, Sale took control. Number Eight Josh Beaumont bulldozed over from the tail of a lineout in the 54th minute, two minutes later Ashton, who with Saracens had scored in previous victories over Connacht, bagged his second. And when Connacht lost possession just shy of their try line, the English winger ran the length of the pitch to bag his hat-trick.

“In the second half, we allowed decisions to affect us more than we needed to, and it is something we will have a real good look at because we pride ourselves on controlling things we can control. When things outside our control start to get under our goat, we have to look at what we are doing.

Needing a quick recovery, Connacht will have key players returning for Friday’s crunch Pro 14 fixture against Ospreys, while also having taken another step in future-proofing the squad.

“I believe we have healthy squad, but we had another two debutants out there today and two other guys got their first start. They are great opportunities to blood these blokes.”

And with Craig Ronaldson ruled out for the season, Friend is looking for another outhalf.

“We need to give blokes opportunities. Conor Fitzgerald did very well. For him to control the game and kick the goal from the sideline was great, and Colm De Buitlear didn’t look out of place out there either, so I am comfortable with what we did.

“It’s an opportunity as I am trying to learn something about the boys in the squad. For some of them it was their first time playing, and for others, it is who can stand up when the likes of Jack [Carty] is not there, when JB [Jarrad Butler] is not there, Quin [Roux]is not there, and who is going to stand up and take that space and try to dominant that space, not just in their role, but in the context of giving support, encouragement, and confidence to the other boys around him?”