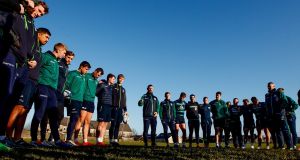 Connacht backs coach Nigel Carolan speaks to the team ahead of the Champions Cup clash with Toulouse. Photo: James Crombie/Inpho

Andy Friend has restored some of his first choice players for Saturday’s meeting with Toulouse after coming through with a victory against Montpellier last week despite missing 16 players.

Bundee Aki remains out of the matchday squad but Quinn Roux has come back in to captain the side in the absence of Jarrad Butler and he will line up alongside Ultan Dillane in the second row after the latter came through the Montpellier game unscathed following a recent back injury.

In the front row there are two changes, with Dave Heffernan coming in at hooker and Peter McCabe at loosehead. Dominic Robertson-McCoy is retained at tighthead with Finlay Bealham named on the bench after a two week layoff with injury.

In the back row, the versatile Eoghan Masterson comes in at blindside with Colby Fainga’a at openside and Robin Copeland starting again at number 8.

There is a reshuffle in the backline, with Matt Healy at full back in a back three that sees Kyle Godwin and John Porch on the wings, while Tom Farrell comes into the midfield alongside Tom Daly.

Caolin Blade will make his 100th appearance for the province when he forms the halfback partnership with Conor Fitzgerald.