Which Champions Cup team do you think has the worst jersey?

Leinster, Connacht, Ospreys and Exeter - do you agree with Matt Williams descriptions? 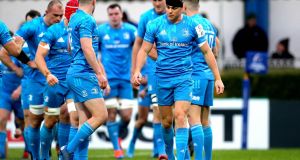 The Leinster team in action against Benetton last weekend at the RDS Arena. Photograph: Ryan Byrne/Inpho

Matt Williams is not one bit impressed by the standard of jerseys in this year’s Champions Cup.

In his weekly column for The Irish Times, he describes last weekend’s opening round of the competition as being “awash with exceptionally awful jersey designs that could see most of the gear used as high vis work clothes in the future.”

Munster will be relieved though, they’re the one Irish province to get the thumbs up from the former Ulster, Leinster and Scotland coach: “Tomorrow at Thomond, Munster’s feared red and navy, contrasting with the classic sky blue and white stripes of Racing 92 will be a beacon of class in a crass sea of jersey marketing. “

As for these four, well he didn’t hold back.

Use the text box below to tell us which jersey you think is the worst and we'll collate the answers before revealing the winner (loser?).

“It would appear that the inspiration for Exeter’s strip came from the regurgitations of overeating beetroot and blueberries.

The Welsh province have not impressed with their “viral mix of blue, grey and iridescent green”.

Connacht enjoyed a memorable win over French club Montpellier, but no need to rush out and pick up the jersey based on this colour description: “Connacht’s hatched greenish, grey lines.”