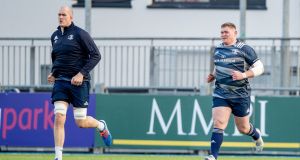 Devin Toner and Tadhg Furlong training at Donnybrook. Furlong returns to the starting line-up in France while Toner must settle for a place on the bench. Photograph: Morgan Treacy/Inpho

A veteran of the European experience, Leo Cullen knows familiarity is currency, especially in France.

“When you see the European draw, you look to see what’s the French team,” said the Leinster coach. “Last year, in Toulouse, if you think of the game; we’d seen a lot of footage of Toulouse. Then you actually get there and there’s the cauldron atmosphere and it’s a very different team to what you analysed on the footage.”

While Kearney and Furlong will not have had specific knowledge of the current Top 14 leaders as the French side played their first season in the Champions Cup just last year, the point is about European DNA, their inclusion giving the profile of the starting line-up an able, wilful look.

There’s little not to like about the Robbie Henshaw and Garry Ringrose pairing. Together for the first time this season in the centre, Henshaw is looking for impact and Ringrose just off his hat-trick last week.

With Luke McGrath and captain Johnny Sexton in the half backs, that’s maybe as strong as it can be while James Lowe and Jordan Larmour provide more bristling strength on the wings.

Leinster back it up with a pack strong enough to leave Devin Toner on the bench. Scott Fardy and James Ryan will spearhead the second row challenge with Furlong’s back injury has cleared enough to put him in with loosehead Cian Healy and hooker Ronan Kelleher.

In the back row Max Deegan starts at No 8 for the first time in the Champions Cup with Josh van der Flier and Rhys Ruddock either side, clearly planning on matching any physical threat from the Lyon pack.

Lyon, who had a cold start in Franklin’s Gardens against Northampton, gave away 17 penalties in that match and they will expect to fix that. The lineout did not function and that will be another targeted improvement. Poor basics, especially during the opening half hour against the Premiership side, proved frustrating to their former All Black centre Charlie Ngatai.

“It wasn’t where our standards have been this season,” he said. “We were disappointed in our own performance. At this level you can’t give away as many penalties.”

Lyon’s powerful 2016 Olympic gold medal-winning [in Sevens] Fijian Josua Tuisova didn’t pass a fitness test and is not included in their squad. That blunts the home capacity to draw in defensive tackles, although with centre Ngatai and Noa Nakaitaci on the left wing, they are not short on edge.

Lyon are also wary of the former champions. From the line-up they will sense intent and it’s a Leinster team that remain unbeaten this season. But Lyon are perplexed at their own dull sequence of performances in European rugby, seven defeats from seven across last season and this .

“We must stop saying that we learn,” said replacement, Jonathan Pélissié, clearly exasperated that results have not fallen their way.

Lyon will hope that they can settle quickly in front of their home fans and not hand over the early initiative as they did last week. They are a strong side badly in need of a morale-boosting win with hooker Mickaël Ivaldi, seeing the game “as a detonator on the European scene”.

That could be construed as a threat to Leinster. And maybe also fun to watch.

Confirmed: 2020 Ryder Cup is postponed to 2021 16:14
Roger Federer: The balletic genius whose greatness goes deeper than numbers 15:53
Stephen Kenny: Ireland reaching the Euros would be ‘extraordinary’ 15:33
Ben Youngs pens a new deal with Leicester 12:05
Solskjær says United’s unbeaten run is ‘nowhere near’ enough 11:53
Crossword Get access to over 6,000 interactive crosswords