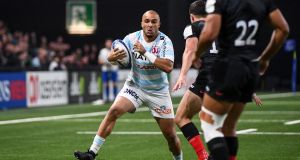 Kick-off: 5.30pm, Saturday. Venue: Thomond Park. How to follow: The Irish Times liveblog will begin at 5pm. On TV: Live on BT Sport.

And so they meet again, but this is not the customary case of familiarity breeding contempt.

The respect between the two clubs runs deep, all the more so after Anthony Foley’s tragic passing on the morning of their scheduled opener in Paris two seasons ago, and the presence of Simon Zebo and Donnacha Ryan in Racing’s classy sky blue strip adds to this evening’s intrigue.

Zebo has always been a big hit hereabouts, and his recall at fullback is sure to take this contest even closer to an expectant full house in what will be the biggest attendance of the weekend.

Furthermore, this sixth meeting in three seasons, with a seventh to follow in January, follows bonus-point wins last week, with Saracens’ travail ensuring this latest instalment will be critical in a hotly contest Pool 4.

Munster are not taking any chances with Tyler Bleyendaal’s ‘stiffness’, but this is offset by the return of JJ Hanrahan. Tadhg Beirne has also been promoted after his telling cameo last week and Jack O’Donoghue is preferred to Tommy O’Donnell in the back row.

It is a measure of the battle Munster anticipate up front that, unusually, Johann van Graan has opted for a 6-2 split on the bench – albeit very much in vogue with South African coaches of late. Meanwhile, as well as reinstating Zebo, Racing have promoted Dominic Bird to lock and switched Boris Paul to flanker.

They have long memories in Munster, and although they have a 4-3 head-to-head record, and nearly completed successive pool doubles two seasons ago, come the semi-finals Racing’s start lived up the club’s name and Munster’s sluggish, post-South African trek ensured it was over as a contest within 30 minutes.

Much of Munster’s pre-match focus to that game centred around the Parisians’ exceptional lineout, which proved well founded, although Niall Scannell admitted this week that the presence of Ryan perhaps made Munster revamp their lineout too much for their own good.

But that threat remains. Racing pinched seven of Saracens’ throws last week, including all four the holders had in the first half, even if Saracens were missing all their key lineout men.

Munster’s set-pieces have looked solid under the coaching of Graham Rowntree and their defensive system is well primed. Inevitably, it will take longer for Stephen Larkham’s influence to really manifest itself, but there have been signs of them cleverly using the blindside and going to the edges more, as well as one or two strike plays.

Against that, Racing’s unpredictable attacking game, with the running, offloading, passing and wicked short-range kicking of Finn Russell, will ask bigger questions of Munster’s defence than anything they’ve faced. Disconcertingly for the once adoring home faithful, Zebo is due a try.

Munster enjoyed an advantage in sharpness and World Cup personnel over the Ospreys last week, but that will not be the case here.

Camille Chat, probably France’s best hooker, Cedate Gomes Sa, Wenceslas Lauret, Maxime Machenaud, Russell and Virimi Vakatawa (currently one of the best attacking midfielders in the world) have all returned from the World Cup with a relatively light load.

This Racing look like one of the best Top 14 sides to visit here, and Munster may have to resort to some of their traditional, suffocating virtues. They could do with a racing start this time. They’ll certainly need their A game.