Godwin and Porch named on the wings for the Irish side, with Farrell coming into midfield 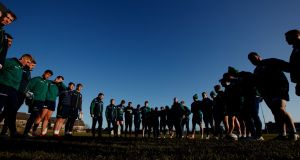 Connacht squad training at the Sportsground in Galway this week ahead of the game away to Toulouse. Photograph: James Crombie/Inpho

Connacht will be looking to upset massive odds again in this Champions Cup joust with current French champions Toulouse.

If few would have predicted an opening day victory over Montpellier last weekend, imagine the odds when Connacht made their first visit to the capital of France’s southern Occitanie region in 2013, and, defying an eight-game losing steak, shocked the four-times Champions Cup winners with a 16-14 victory.

It remains Connacht’s greatest victory on the European stage, setting them on a path under Pat Lam that culminated in a first piece of silverware in the Pro12 competition.

Key to that win were Dan Parks with his kicking and Kieran Marmion with a crucial try. Marmion, who is recovering from a hip injury, will miss this fixture, but Caolin Blade, man of the match last weekend, will make his 100th appearance in a side that boasts several changes from the Connacht team that overcame Montpellier.

Matt Healy, recovered from a back spasm, is handed the fullback jersey on this occasion. He is the sole player on Saturday’s team from that famous victory in 2013, and, in the absence of Tiernan O’Halloran, Darragh Leader, and Stephen Fitzgerald, will don the Connacht number 15 shirt for only the third time – his first a European game against Grenoble in 2016.

Kyle Godwin and John Porch are named on the wings, while Tom Farrell comes into the midfield alongside Tom Daly due to the absence of Bundee Aki.

In another change Andy Friend has opted to start youngster Conor Fitzgerald, with Jack Carty on the bench.

Also unavailable are Jarrad Butler and prop Denis Buckley, which has necessitated changes in key positions. Peter McCabe, having just returned to the province on a short-term basis, takes over in the front row, while Eoghan Masterson joins Colby Faingaa’a and number eight Robin Copeland in the back row.

There is some good news on the injury front, however, with international lock Quinn Roux, who will captain the side, returning to partner Ultan Dillane, while prop Finlay Bealham is named on the bench.

That international experience will be necessary as they come up against the current Top 14 champions, who have their eyes fixed on the trophy, having made it to the semis last year, losing to Leinster 30-12 at the Aviva.

Connacht will go into this game buoyed by last week’s win, but this will test more than Connacht’s never-say-die attitude and defensive capabilities.

“We were happy with the character shown against Montpellier,” said Friend, “but we know we will need to improve.”

That is a given when up against a Toulouse side that is a Who’s Who of rugby.

This French outfit boast equal measure of gristle and speed. They mean business. With 13 world class internationals in their starting line-up alone – and another five on the bench – this could be a tough day for Connacht.

It is hard to see anything other than a home win.