Gerry Thornley at the Stoop 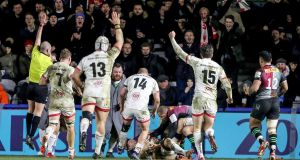 Ulster took a sizeable step towards the knockout stages of the Heineken Champions Cup for the second year in succession with a comparatively routine and ultimately fairly comfortable win over Harlequins compared to the drama of a week ago.

That it came with a bonus point took them to 17 points in Pool 3, and with the fall-back of Bath at home in round six, Ulster will head to Clermont in their penultimate match for a shootout to top the group, but with both looking sure to qualify.

Match winner extraordinaire in the first of three narrow wins, John Cooney, more on fire than in form, was again the star turn here, scoring a brace of tries in his haul of 19 points. He now has five tries in his last six games, and four in this competition, in which he has accounted for 54 of Ulster’s 89 points.

Marcell Coetzee was again a force of nature, with 18 carries for 40 metres, and Sean Reidy and Stuart McCloskey had big games too. Cooney and Billy Burns pulled the strings, while Jacob Stockdale was increasingly assured and influential at fullback, having a big hand in two tries.

Such was their supremacy on the night that Ulster’s initial difficulties started with their failure to turn 87 per cent territory in the first half-hour into more than a 3-0 lead. This was given to them by Cooney’s sweetly struck 40 metre penalty after Kyle Sinckler, captaining Quins for the first time, fairly blatantly lay over the ball and the carrier rather than role away.

Ulster had been monopolising possession, with Coetzee building up such a head of steam that Quins’ former Ulster outhalf Brett Herron departed with a head knock and Santiago Garcia Botta required lengthy treatment.

They pulled the trigger a bit prematurely on a couple of occasions when all they had to do was build pressure and wait for the penalties. They came too but twice, curiously, Iain Henderson turned down two eminently kickable three-pointers, and both times the lineout maul came to naught, when a steady 9-0 lead could have been constructed.

Never give a sucker, or a home side, an even break.

James Chisholm’s turnover led to a break out, which was compounded by Stockdale’s pass to Matt Faddes enabled Vereneki Goneva to dump the winger into touch. Home fans had their first reason to cheer thus far.

Lock Stephen Lewies sped on to a deft inside ball by Sinckler, regularly the first receiver, and from a procession of infringements, James Lang drew the sides level for Luke Marshall’s high tackle.

Whereupon, nearing half-time, Ulster conjured a beauty from a scrum inside their own 22 which was the product of Cooney forcing a spillage from Cadan Murley. Stuart McCloskey shaped to truck it up but pulled the ball back for Burns, who sped between the two Quins’ centres, fending off Murley with one hand and offloading with his left to Stockdale. The fullback carried into the Quins half, passing to Faddes and he stepped inside for Cooney (who else?) to score with his inside trailer. His conversion closed out the half.

The rain arrived during the interval and when Ross Chisholm fumbled Burns’ chip, Ulster were well set. But Marshall knocked on and from the turnover Semi Kunatani burst through Henderson and Treadwell before finding Ross Chisholm. Only the scrambling of Cooney and Faddes prevented the try.

Instead, when Kunatani tackled an airborne Stockdale, Ulster went up the line. Using a penalty advantage to full effect, instead of trucking it up or pulling it back for Burns on the loop, McCloskey unveiled another arrow in his quiver with - of all things - the deftest of left-footed grubbers toward the unguarded posts with Quins’ two back fielders marking the flankers.

Marshall made a sliding gather to score, and the way the Ulster coaches celebrated suggested it was one they’d spotted at half-time. A 17-3 lead, forcing a disheartened Quins to play catch-up in the teeming rain.

Burns’ kicking game penned the home side into their own 22, and after Coetzee trucked it up again, Cooney reacted stealthily when Ulser’s ruck ball went loose. Nudging the ball forward, the scrumhalf gathered and stepped Ross Chisholm in one deft moving before diving over and, of course, converting.

Lewies charged over form a lineout maul for a consolation score as Burns appeared to catch the elbow of a charging Paul Lasike in the move and had to be replaced by Bill Johnston.

Twice they went to the corner again, but unbelievably Rob Herring and his replacement, Adam McBurney, in turn were culpable of crooked throws. Whereupon, ironically, a horrible overthrow came from the Quins replacement hooker Jack Musk.

The noisy clusters of visiting fans at either end of the Stoop were standing up for their Ulstermen and in full voice when Tom O’Toole crashed over with their fifth try in the game’s final play.

Many Quins fans had already vacated the premises, and although this is a Remain/Lib Dem constituency, they will reluctantly accompany the other English team in this group, Bath, in exiting Europe by the end of January.