Ulster need to hit the ground running in Champions Cup

Big performances needed from Henderson, Deysel and McCloskey as side hosts Wasps 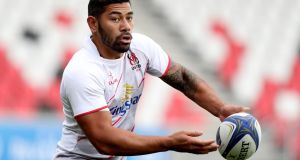 Ulster’s Charles Piutau in action during training ahead of their European Champions Cup opener against Wasps. Photograph: Tommy Dickson/Inpho

On TV: Live on BT Sport.

This isn’t a bad old way to kick off the 23rd edition of the European Champions Cup, in its various guises. The Kingspan Stadium, be it the old Ravenhill or its bigger, more modern incarnation, rocks for European Friday nights under lights as thunderously as anywhere, and this should be no different.

This competition may be more a series of sprints than a marathon, but in failing to reach the knockout stages for the last three years, Ulster gave themselves a taxing incline by losing their opening game, and two of their opening home games. They know they have to be quicker out of the blocks, and in so doing this would really kick-start their season.

Nor does this appear to be the worst of times to be playing Wasps. They haven’t had the same X factor since the departure in turn of Charles Piutau and Kurtley Beale (hardly surprising really) over the last two seasons, and whereas they led the premiership virtually all the way last season before losing a dramatic final to Exeter after extra time, they currently languish in 10th place.

Wasps were missing 15 players through injury last week, including a raft of carriers and playmakers, when their heaviest defeat to Saracens also condemned them to a fourth Premiership loss in succession for the first time since March 2014. Thanks to BT’s scheduling, ironically, and an agreement signed off by Premiership Rugby, they’ve also been hit with a five-day turnaround, whereas Ulster have had seven days since a badly needed win over Connacht erased the memory of their loss away to Zebre, their first defeat of the season.

As expected though, Wasps are bolstered by the return of captain Joe Launchbury as well as England backrow Nathan Hughes, which infuses them with two ball-carrying forwards, and former Leinster outhalf Jimmy Gopperth, which should give them some direction. Christain Wade has also been recalled on the right wing to sharpen their cutting edge, as has Dan Robson at scrumhalf. They also have their two summer Lions, Elliot Daly and James Haskell, whereas Ulster are missing two of their three Lions.

Iain Henderson, who shifts to the secondrow, captains Ulster for the first time and leads a starting XV that features 12 internationals. Les Kiss has made three changes in personnel, with Robbie Diack and Sean Reidy introduced alongside Jean Deysel, who will make his Champions Cup bow for Ulster, while Louis Ludik comes into a back three featuring the in-form Jacob Stockdale and Piutau. Tommy Bowe is on the bench, whereas Andrew Trimble doesn’t make the 23.

Piutau, coming up against his former club, is key. In this competition last season he led Ulster’s count for tries (three), carries (65), metres gained (500), line breaks (nine), defenders beaten (28) and offloads (11). Apart from that, he didn’t do much.

The absence of Payne and Gilroy denies Ulster a general from the back or midfield, and game-breaking footwork, but playing at fullback affords Piutau the most scope to bring his footwork, pace, strength and match-winning talents to bear.

Much will also hinge on the developing halfback partnership of John Cooney and Christian Lealiifano, who will make their European debuts for the province in their sixth outing together.

Most important of all though, is whether the likes of Henderson, Deysel and McCloskey can put Ulster on the front foot. Somehow, even more than most but akin to Wasps, they look like a different team when that applies.

These two have some history, even if it goes a long way back. Wasps have won five of the sides’ previous six meetings in this competition, albeit they haven’t met for 16 years, when Ulster handsomely beat a star-studded Wasps team by 42-19 in October 2001. David Humphreys was in vintage form, and his 37 points (one try, one conversion, four drop goals and six penalties) remains a record for the highest individual points tally in a European Cup match.

The old Ravenhill was humming that night, as is generally the case for a visit from one of the Premiership‘s finest, against whom Ulster have a pretty decent home record of 13 wins in their last 17 games against English opposition. Furthermore, Wasps have lost six of their last seven games in this competition in Ireland, including two last season against Connacht and Leinster.

They’re liable to find the crowd in full voice, and the home team at full throttle.