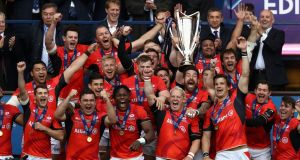 Saracens once again look like being the team to beat this year. Photo: Getty Images

After three pool exits in a row (losing 10 of 18 matches) Ulster should be better equipped this season, although they’d be a different proposition with Marcel Coetzee, but Wasps were missing 15 players last week when suffering a record beating by Saracens.

Anyone of four could top this unpredictable pool. Perhaps it will be Ulster, due a Euro run, but La Rochelle could be dangerous.

Saracens have eased themselves to the top of the Premiership and are seeking to extend their unbeaten run of 18 matches in this tournament.

Their games with Clermont in a reprise of last season’s final look momentous and pivotal. Clermont lie ninth domestically and have yet to pick up a point from four away games. They’ll also be hit by French demands, but will target Europe.

Northampton have recovered from opening day mauling by Saracens and would be top of the table but for late call for obstruction last week in Gloucester.

The Ospreys are floundering afoot the Pro14, having managed one win (at home to Zebre) in six games.

A particular brute of a pool. Leinster, three-time winners and last season’s semi-finalists, have yet to hit last season’s heights but may be getting there, and are equipped for long haul.

Ambitious Montpellier probably have the most expensively assembled squad in the competition after acquiring Louis Picamoles, Ruan Pienaar and Aaron Cruden, and will be vengeful for last year’s 57-3 embarrassment at the RDS.

Exeter, the English champions, lie second domestically and haven’t lost in the Premiership at Sandy Park since October last year.

Glasgow, who reached knock-out stages for the first time last season, have progressed under Dave Rennie, and are the only unbeaten team across all three leagues.

Leinster to top pool, chased home by Glasgow (who are a tempting wager at 9/1 in their current form.

Munster always add up to more than the sum of their parts in Europe, and have navigated through the pool stages 15 times in the last 18 seasons.

Meanwhile, Racing – who stand eighth – have been desultory, although their impending move to the state-of-the-art U Arena may be inspiring.

Leicester, with four Premiership wins in a row for the first time since March 2015, have shown signs of a resurgence under Matt O’Connor. George Ford is pulling the strings at out-half and new signing Jonny May has six tries in six games.

There’s no more pro-European team in France than Toulon, three-time winners. They’re even more ambitious under Fabien Galthie and Fabrice Landreau, with Mathie Bastareaud inspired by the captaincy.

Bath, though inconsistent, are progressing under Todd Blackadder. The mercurial Freddy Burns was sent-off on his debut last week, and they have an array of match-winners.

A revived Benetton, with two wins in their last 27 European Cup games (both at home to the Ospreys) could take scalps, and have won three of their last four in Pro14.

Toulon and Scarlets to advance, although this looks a pool which could throw up a surprise or two.