Ulster can hope for a strong start against wounded Wasps 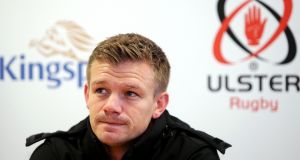 Dwayne Peel is hoping Ulster get off to a strong start against Wasps on Friday. Photograph: Jonathan Porter/Inpho

Though you won’t find Ulster actually admitting it, their opening game in the European Champions Cup against Wasps comes with the notion this is a good time to be playing the Aviva Premiership side.

Les Kiss’s squad kick-off their Pool One campaign at home, on what is sure to be a typically raucous Friday night at the Kingspan Stadium.

They will still be without Jared Payne and Rory Best, though the latter harbours hopes he will return from his hamstring issues for the next game at La Rochelle.

But as well as home advantage, Ulster are also preparing to face a Wasps side who are not too far away from crisis.

Last season’s beaten Premiership finalists come to Europe having lost four consecutive domestic league games and have an extensive injury list which could rule out Nathan Hughes and Jimmy Gopperth, with Danny Cipriani a long-term absence.

On top of that, Dai Young’s Coventry-based squad are having to manage a five-day turnaround following Sunday’s defeat to Saracens, with lock Joe Launchbury among those who didn’t travel to Allianz Park.

Not surprisingly, Ulster assistant coach Dwayne Peel batted aside all notions that all this suggests the home side, who were far from the complete package in seeing off Connacht last week following a shock defeat in Zebre, ought to be in a good place to manage a vital opening win.

“I am sure they will be very strong coming here,” he insisted.

“I’ve watched their games the last couple of weeks and they’ll have a few guys back from injury so they will be pretty loaded coming here.

“It is not for me to comment on the fixture scheduling,” Peel added of Young’s problems in dealing with the five-day turnaround.

“It is what it is. They changed up their team a bit on Sunday so they will be coming fairly strong and we’re looking forward to it.”

Ulster will be looking for another notable game-breaking display from Charles Piutau - who will be playing against his former club - whose counter-attack to put winger Jacob Stockdale over for a stunning try last Friday won the game against Connacht.

And with Christian Lealiifano’s influence steadily growing along with that of John Cooney, Ulster have a sound halfback pairing and a Peel-coached backline which has the ability to play directly and with width.

They will, though, have genuine concerns over their front five and the issues they have encountered in recent weeks at the scrum.

Even so, Ulster are clearly quietly confident that they should make a decent start to their campaign and avoid any repeat of last season’s slump, when they finished bottom of their pool.

“I think in any pool you need a good start and you must win your homes games,” said Peel.

“There’s no doubt this is a big game for us in terms of the pool context and the competition as a whole.

“That brings pressure in itself, but within that pressure brings excitement.

“Hopefully we’re up for it on Friday.”