How are Leinster and Munster shaping up before Europe? 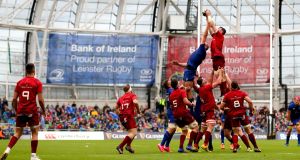 Leinster’s Devin Toner and Peter O’Mahony of Munster compete for the ball during their Pro14 clash at the Aviva Stadium. Photo: James Crombie/Inpho

Leinster’s satisfaction in winning a contest of this ilk will be tempered slightly by glitches in performance. Dominating territorially and in the possession stakes, the return on the scoreboard was relatively modest in comparison.

This is partially attributable to the cohesion in Munster’s defence for the most part but it doesn’t fully explain the shortfall in points. Leinster spurned several gilt edged opportunities because of a lack of clarity in option taking and also imprecision, sporadically but not exclusively within metres of the line.

The home side survived these foibles in attack to win but require an appreciable improvement ahead of next week’s opening Champions Cup fixtures. Ditto for Munster, who will reflect on outscoring their opponents by three tries to two, and showing character to eke out a bonus point, but it won’t camouflage the flaws in performance.They were dominated for long periods and were undermined by careless errors.

Munster defence coach Jacques Nienaber will be reasonably satisfied with his side’s efforts despite the concession of a brace of tries to Rory O’Loughlin. Given Leinster’s dominance of the football, particularly in the first half, Munster were largely well organised in defence, filling the field and more often than not had a numerical advantage when their opponents looked to go wide.

Leinster committed too many players to rucks or perhaps at times lacked the numbers to clear out quickly, ball carriers were isolated so blue shirts were forced to rescue possession. Munster also changed up the line speed when they identified an opportunity to harry and close down the intended recipient.

Ian Keatley did this superbly for his ‘intercept’ try as did Keith Earls, the latter more than once in shutting down a threat. Leinster will rue lapses in concentration in defence, no more so than Earls’ first try. It’s striking the number of times that a loose pass/tap back and a bouncing ball seems to befuddle the team that should profit from the misdirection of the ball.

Tommy O’Donnell did superbly to turn a perilous situation into an unlikely try but Leinster players were marked absent without leave as he accelerated through a gaping hole at the lineout where there should have been none. Leinster too harried their opponents effectively and made some good reads to come in and smother in man-and-ball tackles but those three tries conceded will rankle.

It was very much a contrast in styles. Leinster identified the aerial route and Jonathan Sexton’s cross-kicks proved a consistent and effective gambit, thanks primarily to Adam Byrne’s athleticism and ability to reclaim possession once the kick was reasonably well directed.

Leinster were direct in their carrying, getting forwards to take on ball but were largely well marshalled in the tackle. The difference was when a player came from depth, changed the angle or used footwork and Rhys Ruddock was excellent in this respect, while Joey Carbery offered the most exquisite example in setting up Rory O’Loughlin’s second try, following Sexton’s clever wraparound.

But the home side will be disappointed that they crabbed laterally and also overloaded the short-side with too many players; the fingertip offload places a massive premium on timing; a nanosecond off and the chance is gone.

The development of Munster’s back play is a positive aspect of their performance and at times they were very effective in creating space out wide. They targeted Carbery in trying to give wings Andrew Conway and Keith Earls an opportunity to run at the Leinster fullback one-on-one.

It’s reliant on the players inside timing passes and fixing the drift defence; Earls second try was a beauty and cleverly worked.

It was honours even to a certain degree. Munster’s starting frontrow got the edge early on and enjoyed the satisfaction of earning a scrum penalty while Leinster’s replacement frontrow replied in kind in the second half. The scrum wasn’t really used as a focal point for attack with the defending backrows vigilant and both teams managing to defend the crash ball down the 10 channel.

Leinster deserve the take some satisfaction from their work in the lineout. Devin Toner ran a tight ship. They got the ball down and mauled effectively, forcing their opponents of concede a handful of penalties and there was also one moment in the second half when Munster earned a spate of penalties in the corner between the West Stand and Havelock Square end. Each time they went to the corner but in the definitive moment, the Leinster pack managed to first stop the maul and then force a scrum turnover.

Munster will reflect though that the genesis for two of their three tries came from lineouts, one rather fortuitously in terms of a loose tap back inside their own 22, rescued and revitalised by O’Donnell and the Earls’ second originated from a cleverly worked variation that sucked in Leinster defenders in one corner for the wing to eventually score in the other.

The constant chopping and changing in terms of personnel, predicated on a legacy from Lions and summer tours requiring different pre-seasons for distinct groups of players means that it can be difficult for teams to find their playing rhythm and that too is applicable to individuals.

Keith Earls proved an exception in an individual context, sharp in his reading of the game and also in the manner in which he finished for both tries. He might have had two more but for Chris Farrell’s pass correctly ruled forward and a superb scrambling tackle from Carbery that stopped Earls from galloping off into the sunset. Johnny Sexton too was another whose performance was strikingly assured given curtailed game time.

For others though match sharpness can only be accrued gradually. Robbie Henshaw, Jack McGrath, Tadgh Furlong, CJ Stander, Peter O’Mahony, Conor Murray will all benefit from this blowout and will have a greater influence on matches down the road.

Some units within both teams were a little disjointed and while pressure exerted is a factor, so too is not having played together, in some cases for a while and in others only briefly. The key for Leinster and Munster arising from this game, a few returning players notwithstanding, is to bring a greater fluency and cohesion next week because Saturday’s levels won’t suffice in the Champions Cup.

Missing pieces of the jigsaw

Both head coaches Leo Cullen and Rassie Erasmus will have to solve a puzzle or two ahead of Leinster’s clash with Montpellier at the RDS and Munster’s game against Castres Olympique in France and they relate to the composition of the respective backlines.

Munster looked at their most dangerous, even allowing for the time in the match ad the raft of replacements, when JJ Hanrahan was outhalf, Alex Wootton was on the wing and Andrew Conway had shifted to fullback. Last week’s man of the match Ian Keatley had a decent game but the experiment of playing him at 10 and Tyler Bleyendaal didn’t get a decent opportunity given the fact that they were starved of possession for the most part.

Chris Farrell should retain the number 13 jersey, Hanrahan is an option at 10 or 12, Wootton is a strong contender for a spot on the wing if Simon Zebo hasn’t recovered and Conway is more of a threat from fullback.

Leinster too will have some backline concerns. Rory O’Loughlin took his two tries superbly and his relationship with Henshaw can only be truly effectively forged in the white heat of matches. Joey Carbery is probably the most naturally gifted player in the country who, if Leinster can secure quick front foot ball, will be even more devastating.

The composition of Leinster’s back three will be interesting, indeed the three quarter line because with the exception of the cross-kicks and the Sexton/Carbery link for the second try there was a noticeable lack of consistent penetration. There is much to be done for both Leinster and Munster.