Johnny Sexton continuing to tick all of the boxes 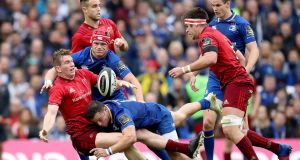 For a team that never led and rarely threatened to do so, Munster could nonetheless take plenty from this game and certainly, as Rassie Erasmus maintained afterwards, more than was the case on this same weekend a year ago.

Although the scoreline then, 25-14, was similar, Leinster were arguably more clear-cut winners that day, and a year on, despite having to do more of the defending, Munster turned the 3-2 try count around,

The work-rate and discipline of their defence – which showed good line speed, made good reads and numbered up to ensure they were never outflanked out wide – kept them in the game, not least when Ian Keatley poached a turnover try while they were down to 14 men in the first half.

Though living off scraps until the last quarter, thanks in the main to an 11-1 penalty count until that point, Munster showed plenty of ambition, made more line breaks and offloads, as well as scoring more tries. To this end, they were helped considerably by the penalty count balancing with six to none in their favour. As Erasmus maintained, those lob-sided penalty counts of the first hour and the last quarter coloured so much of this match.

It will be fascinating to see which of their three outhalves Erasmus goes with away to Castres next Sunday, although even so the evidence seemed to suggest JJ Hanrahan took the ball to the line and marshalled the backline better.

“We’ve played around, but we must stop playing around now and settle on selection combinations next week. We’ve seen who can do what and now we must pick our best side on form next week. But it’s nice to have three proper 10s.”

Not surprisingly, he was not of a mind to reveal his preferred choice, although strongly intimated that Niall Scannell will return at 12 after experimenting with Tyler Bleyendaal there on Saturday.

“I wouldn’t like Castres to know that already. We had to try Tyler at 12 because we lost Jaco and Dan Goggin. We’ve got Sam Arnold still there.

“We can play Earlsy at 13, but we tried Tyler in case we’ve another injury at 12. We know who the number one 12 is. We chose to alter it a bit today. We know who our number one 10 is and we’ll go with him next week.”

Particularly encouraging was the sight of a razor-sharp Keith Earls hitting the ground running on his delayed season appearance. He looked dangerous every time he touched the ball, finished very sharply on two occasions, while his best finish of all was correctly ruled out for Chris Farrell’s forward pass to him when he stepped Joey Carbery, sped clear of Rory O’Loughlin and dummied Barry Daly.

“Yes he looked sharp,” enthused Erasmus, who revealed: “He was only supposed to go 60 minutes or so, but he had to go 80.”

“He’s world class,” said Peter O’Mahony, “and we need as many of these guys as we can back fit and playing as well as they can.”

O’Mahony, who took umbrage with Reggie Corrigan’s line of post-match questioning on TG4 regarding a lack of intensity from Munster, also said this game has been typical of the Leinster-Munster rivalry.

“The intensity is always incredible. Collisions are always that step up. It’s a great fixture, it certainly isn’t, you know, there were people talking about a training fixture, it’s far from it.

“The collisions are massive, the intensity, it’s a big part of Irish rugby, the provincial games, your will to win, you want to win and your intensity and everyone tries as hard as they can. They’re very important to Irish rugby, certainly.”

Leinster always looked the likelier winners, and demonstrated perseverance, control and patience for their two tries. Adam Byrne was outstanding in the air, beating Chris Farrell, Peter O’Mahony, Keith Earls and Ian Keatley in a series of separate duels, and this was a critical weapon in Leinster’s armoury.

While Rory O’Loughlin swivelled out of John Ryan’s tackle and rolled with CJ Stander’s tackle for his first try, otherwise there was no way through or around the well-drilled Munster defence.

But Byrne’s aerial ability played a critical part in O’Loughlin’s second try. He beat Keatley and Earls to perfectly-executed, hanging cross-kicks by Sexton which meant Leinster could twice reignite moves and effectively sustain an attack through 23 phases.

It was very well-executed too, as Johnny Sexton reprised his midfield liaison with Tadhg Furlong and Carbery held his depth to pierce the red line classily and put O’Loughlin over. In typically understated style, Scott Fardy ran a fine decoy line off the ball.

Leinster left tries behind too, notably when Jack Conan didn’t link with the supporting Luke McGrath on his inside after his clean break followed good offloading out wide by Barry Daly and Carbery off a quick tap, before Johnny Sexton, turned the screw with a trio of penalties in the third quarter.

All in all, it was a particularly satisfying day for Sexton, captaining his home province to a win over Munster, where his paternal family hail from.

He landed five from five, led the line superbly in defence as ever, passed and kicked well, received another Man of the Match gong and overtook Felipe Contepomi’s landmark of 1225 points as to become Leinster’s all-time leading points scorer.

It’s not every day you can tick all those boxes.