Iain Henderson to lead Ulster in European opener against Wasps 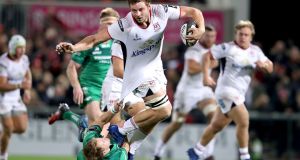 The 25-year-old, with 77 Ulster caps to his name, will lead a starting XV that features 12 internationals.

Ulster director of rugby Les Kiss has made three personnel changes, while the one positional switch will see Henderson move from blindside flanker to second row.

Two of the new faces are among the loose forwards as Robbie Diack and Sean Reidy are introduced alongside Jean Deysel, who will make his Champions Cup bow for Ulster.

The halfback combination of John Cooney and Christian Lealiifano will also make their European debuts for the province.

Kieran Treadwell will partner Henderson in the engine room, while the frontrow of Kyle McCall, Rob Herring and Wiehahn Herbst is unchanged from last week’s 16-8 win versus Connacht.

The one backline change sees Louis Ludik come in on the right wing to form a back three with Charles Piutau and Jacob Stockdale. Stuart McCloskey and Luke Marshall will combine in midfield once again.

Wasps have included two former Lenster players in their starting XV, with outhalf Jimmy Gopperth and centre Brendan Macken both part of the English side’s backline.