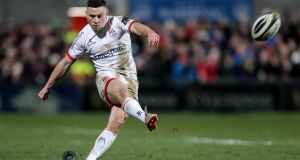 Morgan Parra has been impressed by the performances of John Cooney during this season’s Heineken Champions Cup and the former French international stated Clermont Auvergne will need to curb the Ulster scrumhalf’s influence in Saturday’s clash between the pool rivals at the Stade Marcel Michelin (1pm Irish time).

The Irish province is unbeaten after four matches in the pool, one point ahead of their hosts at the weekend, whom they beat in Belfast 18-13. Parra, who came on as a replacement that day, had a bird’s eye view of a brilliant individual try from Cooney that effectively decided the outcome.

Although he was left out of new France coach Fabien Galthie’s first squad ahead of the upcoming Six Nations Championship, the 31-year-old Parra (71 French caps) remains an excellent player and shares some of the playing qualities that Cooney exhibits, including the fact that both are accomplished place-kickers.

Parra said: “He [Cooney] is the hub of this team and the main points’ scorer. He brought a lot during the match in Bath, he scored against us and he kicked the last [match winning] penalty against the Harlequins [earlier in the tournament]. I watched everything and I know how he plays. As a scrumhalf he has flourished but that is also down to the collective work of the players around him.

“Ulster are a strong team that play with a lot of intensity, are aggressive in defence and have have a strong all-round game, well rounded in all sectors. It is up to us to be as good collectively and strong on the basics to counter them.”

Clermont are hoping to leave their indifferent French Top 14 form behind them, eighth place in the table and six defeats, including two in their last three games. It was a point to which head coach, Franck Azéma referred when discussing it in the context of Saturday’s game. “We will talk about the [Top 14] championship when it comes back, and there is enough to do, but here we focus on our journey in the Champions Cup.”

The French club has never made any secret of their desire to win the Champions Cup, a tournament that has furnished nothing but heartbreak when it comes to outright victory. It hasn’t dulled their enthusiasm. The quality of performances in Europe this season has been stronger than their domestic efforts with the pointed exception of the game in Belfast.

Clermont took a valuable point from that encounter on a night when Ulster dominated and wouldn’t have been flattered by a far greater winning margin. The French side responded with back-to-back wins against Bath last month taking a maximum 10 points as part of three try-scoring bonus points that they have amassed in the pool to date.

Alongside Leinster, they are the top try scorers (20) in this season’s competition and despite the views of Galthie, who omitted him from an extended Six Nations squad, possess Fijian-born, French international Alivereti Raka, one of the best attacking wings in world rugby. He survived on scraps at the Kingspan Stadium yet still caused Ulster problems.

The atmosphere in the Stade Marcel Michelin should be at its raucous best as the game is expected to be played before a capacity crowd. It was interesting that Cooney spoke about practising his place-kicking during the week wearing a set of headphones that mimicked the noise that he would face in Clermont.

Azéma said that he wanted his team to give the supporters the opportunity to become part of the occasion. “We want to set the tempo from the start and be cheered on by the public as much as possible in a match close to the international level.”

1 Ireland 23 Georgia 10: How the Irish players rated
2 Ireland grind their way to grisly win over Georgia
3 No fireworks but Limerick get the job done against Galway
4 Jim McGuinness: There is a way to save championship and make it competitive
5 Ireland’s autumn of discontent continues with abysmal Georgia showing
Real news has value SUBSCRIBE

No fireworks but Limerick get the job done against Galway 19:49
Billy Burns provides silver lining to gloomy Ireland display 19:57
Ireland’s autumn of discontent continues with abysmal Georgia showing 19:24
Chelsea and Tottenham draw a blank at Stamford Bridge 19:04
Andy Farrell: Ireland’s Georgia showing was ‘not good enough’ 18:36
Crossword Get access to over 6,000 interactive crosswords