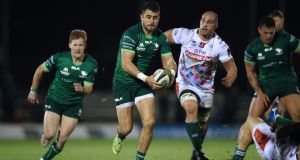 Tiernan O’Halloran: one of the experienced Connacht players who return to action for the crucial game against Toulouse at the Sportsground. Photograph: James Crombie/Inpho

No surprises that Connacht’s Champions Cup hopes are on the line when they face a star-studded Toulouse in the Galway Sportsground this afternoon (3.15pm).

The French champions, unbeaten and leading pool five by a whopping 10 points over Andy Friend’s side, look home and hosed to advance to the quarter-finals, leaving Gloucester and Connacht to fight it out for second place.

Gloucester, who host Montpellier, are one ahead of Connacht on nine points, courtesy of the five bonus points they have accrued, despite only one victory. But as much as this game for Connacht is about needing a win after a poor interprovincial series, it is also about performance. And to that end Friend welcomes the return of some 10 players who are viewed as crucial leaders in Connacht’s fight.

Outside them Friend has been able to select four experienced players from Connacht’s Pro12-winning season, Tiernan O’Halloran, Matt Healy, Niyi Adeolokun, and Peter Robb. The youngster of the backline is Stephen Kerins, the Academy graduate from Sligo, taking over from an overworked Caolin Blade, who moves to the bench.

Up front Friend has been able to select a strong pack, led by returning captain Jarrad Butler, alongside Colby Fainga’a and Paul Boyle, while the Connacht boss will be hoping Gavin Thornbury, joined by Ultan Dillane, will continue his lineout steal leading stat. Paddy McAllister, Tom McCartney, and Finlay Bealham are all back in a front row which can expect to be tested by a heavy-hitting French outfit.

Toulouse, also have rung the changes for their visit to Galway, strengthening their side – none more so than with the addition of South African World Cup winner with the magic feet, Cheslin Kolbe. Add in the likes of scrumhalf Antoine Dupont, fullback Thomas Ramos, Kiwi duo Charlie Faumuina and Jerome Kaino, plus others, and there are nine internationals in the starting XV.

It does not get any easier for Connacht when they peruse the Toulouse bench – six of the eight there have been capped for France.

No wonder Andy Friend describes it as a huge game for Connacht.

“It’s Toulouse coming here, French champions last season. We had a really good contest on their home turf, dropped away in the last 20 minutes, but this is Champions Cup rugby – they know if they win this, they probably top our pool; we know we have to win to stay alive.”

While Connacht will be looking to unsettle the French side early on, particularly if the weather forecast of heavy rain materialises, Friend is concerned with his side’s ability to sustain their efforts for 80 minutes. Having lived with Toulouse and led 15-17 at Stade Ernest-Wallon in the 50th minute, Connacht then leaked two tries in the final quarter, losing in the end 32-17.

“It has to be an 80-minute performance,” says Friend.

“This is a huge opportunity for us. We are all aware our performance over the last few weeks hasn’t been good enough. We have discussed it, and there is a myriad of reasons for that. But all we are interested in now is getting out there and producing a performance we can be really proud of. And we can beat Toulouse.”

This is an enticing fixture for the Connacht faithful, although weather will play a part. Few would expect Connacht to steal a victory given head coach Ugo Mola’s statement selection of 15 internationals.

Having fallen off in the Top 14 (they currently sit mid-table) Toulouse have their eyes on this European trophy and it will take a Connacht performance of intensity and accuracy to dent those ambitions.