No closure for Munster in Paris but a circle is completed 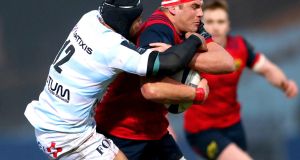 Munster did not complete some sense of closure with Saturday’s re-arranged European Champions Cup win over Racing in Paris, nor would they ever want to. But, a dozen weeks on from the passing of their former number eight and head coach Anthony Foley on the morning of the postponed meeting, they completed a circle of sorts and – most importantly and fittingly – did so exactly in the manner Foley would have wanted.

More than anything, Foley demanded that his players be clinical, and on an emotionally charged and poignant day, even Munster have rarely been more ruthlessly efficient on their Euro travels than in recording this 32-7 bonus point win.

The Stade Yves-du-Manoir – built for the 1928 Olympics and seemingly with scarcely a lick of paint since then – has rarely felt bleaker or colder on a dank, wet day in Paris, yet the home club and fans alike could not have behaved more classily.

Hence, after then quietening the home crowd with a classic away performance for the opening hour, Rassie Erasmus began by paying tribute to the majority of the 9,233 attendance.

“First of all, I have to commend the French crowd and the way they invited us here and honoured us here with the minute’s silence. Overall, in a sad way, it was a nice situation. With the star backs they have and the huge pack, you don’t want to get into an arm-wrestle with them and I think in that last 30 minutes we were in an arm-wrestle. If we had started like that, we would have been in trouble.”

In this game, Erasmus said, Munster had played precisely as he and Foley had discussed the day before the postponed first round game.

“I’m just proud. I thought coming over here before we were close to a performance. On the Friday, I discussed with Axel how when you are playing these French boys who bring on even bigger French boys after 50 or 60 minutes, you can’t get into an arm-wrestle for 80 minutes, [because] you will probably struggle size-wise and momentum-wise.

This was their 10th win in the 11 games since Foley’s passing, but Glasgow away next week will be altogether different. Away to contenders as opposed to no-hopers. Mobile offloaders as against ponderous straight runners. A modern-day synthetic top, not wet grass in a throwback in time. Chalk and cheese really. And Erasmus acknowledged as much.

“Glasgow is a totally different kettle of fish, not that they’re better than Racing or anything. They just play all-out attack, with a mobile forward pack. They contest well at lineout and breakdown so it is definitely a different challenge. You might want to get involved in an arm-wrestle with them! It is a different challenge.”

This win means that Munster are back in charge of their own destiny, and another victory in Scotstoun next Saturday afternoon would secure Pool One and qualification, with the carrot of a home quarter-final should they also complete a double over Racing.

“Next week is going to be a really important game,” said Erasmus. “I think we are now three points ahead of them. So they will want us to get another loss of points next week and then it comes down to the last one to see who can get the most scores – that’s from their point of view. From our point of view we have to try and grind out a win and if we grind out a win we will win our pool if I’m correct. So that’s the situation, we can’t talk past that but in many ways it comes down to that.”

“It is his ankle. I am quite sure it is his same ankle. He is a tough guy. How fully he will be ready I am not sure.”

Of course, the whole day remained heavily tinged with sadness, not least for the Racing defence coach Ronan O’Gara, for there was no post-match beer with his long-time friend and teammate Anthony Foley. He’ll always miss him.

While Foley’s passing has been the catalyst for Munster’s rejuvenation, O’Gara added: “There’s also some brilliant coaching. Players were probably at a low and there was one way they could go but they have gone the right way. Confidence is huge in sport. They are confident and competitive and they are very fit.

“People underestimate how fit they are. You look at certain actions out there like CJ charging the ball down and getting back to be the first receiver around the corner: that’s big work rate and they play for each other as Munster players always have. They were really impressive.”