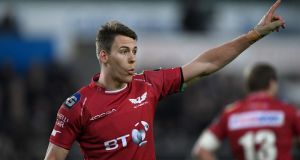 Saracens have confirmed the signing of Wales international Liam Williams on a three-year deal, with the Scarlets flyer moving to Allianz Park for the start of next season.

Williams has won 38 caps since his Wales debut in 2012, and will replace Toulon-bound Chris Ashton at Saracens next season.

The 25-year-old will have to rely on a wildcard from boss Warren Gatland to continue his Wales career next term, when he leaves the Welsh regions.

Saracens rugby director Mark McCall hailed a statement signing of a top-level Test operator, who is equally comfortable on the wing or at full-back.

“He is only 25 years old and has his best years of rugby ahead of him.

“Liam is arguably one of the most talented backs in Europe so to have secured his signing is a real coup for the club.

“We’ll look forward to welcoming him in the summer.”

The so-called Gatland’s Law limits the Wales head coach’s number of Test squad selections from players plying their trade outside of the four Welsh regions.

Williams is the latest of Gatland’s top assets to take the calculated gamble of leaving Welsh rugby while also aiming to continue their Test career.

“I am really excited about joining Saracens and having the opportunity to challenge myself in the Aviva Premiership,” said Williams.

“The club’s reputation speaks for itself and I am looking forward to the next chapter of my career.

“I wouldn’t be the player I am without the incredible support from the Scarlets’ management, players, back-room staff and passionate supporters. I will be giving my all for the remainder of the season and hope to help finish on a high.”

The Scarlets insisted they mounted a strong fight to retain one of theirs and Wales’ top assets, but eventually had to bow to Williams’ wishes.

“Liam has been an asset to the region and will be missed both on and off the field,” said Scarlets’ general manager of rugby Jon Daniels.

“He will always be a Scarlet and we thank him for his total commitment and passion for the region.

“We fought hard to retain Liam but having taken everything into consideration including his personal circumstances he has decided to pursue new challenges which we respect totally.”