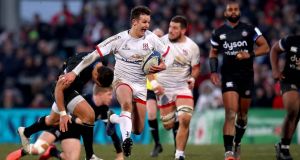 Ulster’s Billy Burns makes a break against Bath during the Heineken Champions Cup clash at Kingspan Stadium. “I’m in the squad but that doesn’t mean I’m an international. I’ve to prove my worth and hopefully get on the pitch.” Photograph: Ryan Byrne/Inpho

For the second time in this pool campaign, the most intriguing subplot within Ulster’s successful pursuit of a second quarter-final in successive seasons was the duel at halfback between Billy and Freddie Burns.

Initially, the underrated kicking game of Bath’s Freddie, at 29 older by four years, gave the visitors a foothold in the game and helped ensure they had much the better of the territory. His crosskick also led to the try by Ruaridh McConnochie which Burns converted to make it an edgy 7-7 at the break.

Whereupon, it was Ulster’s Billy whose carry and offload led to the classy Will Addison setting up a try for Robert Baloucoune, before he moved it wide for Stuart McCloskey and Jacob Stockdale to put Addison over.

So it was the younger Burns’ less celebrated running game turned the tide – that offload in contact one of ten carries he made. He also had the final say with the penalty which sealed the win.

“I was gutted,” he said of his older brother’s crosskick.

“The cheek of him coming here and putting in a cross-field kick! He’s not had loads of game time which has been tough but coming over here, he challenged us with his kicking game.”

Bragging rights for the younger brother then, for the second time in this campaign.

“We’ll be going out for a meal which will be nice. Obviously it was about getting the result but there’s always a little bit of banter floating about. I want to give you a more interesting answer but once you get on the field and the ball is in play, you’re so focussed on what you want to do, you hardly think about it.

“It’s the stoppages in play when you look across, and you want to give him a bit of shit. He caught me a couple of times to be fair, got me at the bottom of rucks, and almost took an interception off me . . . I’d have probably retired if he’d taken that and scored,” he quipped.

“It is different, it’s cool to be playing at the top club level against him, and obviously the family are all here and I’m sure they’re proud, but they’re probably just happy we both came off not injured.”

Called into the Irish Six Nations squad for the first time last week, the younger Burns – who has played for the England Under-18s and Under-20s – is seeking to emulate his brother, who has won five caps for England, in the Test arena and has been inspired by him all along.

His older brother made his England debut as a replacement for Owen Farrell in their 38-21 win over New Zealand in December 2012, and Burns admitted: “I went and watched that game against New Zealand and being in that stadium, you could tell it was just that next level up, the pressure was higher, the skill level was higher, and ultimately any player wants to be at that level.

“I’ve learnt a lot from Fred. I spent a couple of years behind him at Gloucester. He’s been a massive inspiration. I still watch his games. I still follow him closely.”

Burns’s grandfather, Tommy, hails from Dublin and even before this year’s England-Ireland game in the third round of the Six Nations, there were always split familial loyalties anyway.

“My old man [Gerry] will definitely support Ireland, he always has done,” said Burns. “I like to think my mum would but you never know. I’m sure they’ll be supportive.

“I’ve a lot of family in Dublin who are all very proud of me getting in the squad who I’m sure will be there cheering my name if I do get that opportunity. But I’m not looking too far ahead, I’m just looking forward to getting into camp on Tuesday and I want to train well and put my best foot forward.”

Burns admitted that making Ireland’s Six Nations squad had been one of his goals at the season’s outset.

“It seemed a good time, a bit of a new era with Joe leaving and Andy coming in as head coach. Again, it’s boring to say, but ultimately I had to get my stuff right here and I’m still building here.

“My consistency was in and out and if you want to be a top-quality, international ‘10’ that needs to improve. It’s always been a goal of mine to play international rugby and I’m in the squad but that doesn’t mean I’m an international. I’ve to prove my worth and hopefully get on the pitch.”

A thoughtful and engaging young lad, Burns was “over the moon” when receiving the email confirming his inclusion.

“But I knew how big a task this game was. Now I can probably take time to let it sink in. I want to be happy to be in the squad but I can’t just be happy with that. I want to go down and to play and there’s some great talent in the squad. I’m really excited to meet up on Tuesday, obviously with a lot of guys I don’t know. That will hopefully take my game to another level and lead to an international cap.”

After playing 101 games in seven seasons with Gloucester, Burns’s development has been fast-tracked through being the first-choice outhalf over the last season and a half at Ulster.

“My maturity I think has grown, in terms of managing the boys around me and game management. I probably would have been too quick to pull the trigger when I was at Gloucester and probably last year as well.

“I think working closely with Dwayne Peel and Dan [McFarland] a second year of building with the coaches and players around you, you can grow. I’m happy with where I am but I’ve a long way to go to be the player I want to be and can be.”