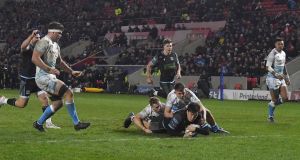 Munster’s slim hopes of advancing to the Champions Cup quarter-finals were ended on Saturday as wins for Glasgow and Northampton rendered the Irish province’s meeting with the Ospreys on Sunday a dead rubber.

Munster came into the final weekend knowing that results elsewhere needed to fall in their favour – with Northampton, Glasgow, Gloucester and Saracens all ahead of them in the standings – but Glasgow had little trouble seeing off Sale 45-7 while Northampton got the job done with a 36-24 win at Lyon.

That means that Munster cannot now reach the last eight, for only the fourth time in the last 22 years, regardless of their result at Thomond Park tomorrow afternoon.

Glasgow’s win does not guarantee them a place in the quarter-finals with Saracens and Gloucester still capable of overhauling them when they play their final pool games tomorrow.

Northampton had kept their hopes of qualifying for the knockout stages alive earlier in the day with a dramatic win over Lyon at the Matmut Stadium.

The men from Franklin’s Gardens crossed for tries from Mikey Haywood, Teimana Harrison, Cobus Reinach, George Furbank and James Fish while the French side turned in their best performance of the pool stages, with scores from Felix Lambey, Liam Gill and Charlie Ngatai.

The Saints must now hope that Saracens and Gloucester fail to secure bonus-point victories against French giants Racing 92 and Toulouse respectively.

“I’ll spend tomorrow like I normally do, with a review from our game,” director of rugby Chris Boyd said. “We’ve got London Irish next Friday which is a really important game for us. It’s tough for those that have got young kids (to spend Sunday working), but for me it’s just a big rugby day.

“Of course I’ll be keeping an eye on the scores. Often I’ll be on my computer with one channel and the TV with another, listening to something else on the radio and watching my phone.”