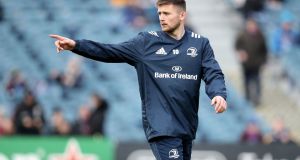 Ross Byrne: will have extra incentive to produce another big display for Leinster having been omitted from the Ireland squad this week. Photograph: Dan Sheridan/Inpho

It’s the diligence of Leinster’s preparation that allows them to absorb personnel changes without blinking an eye.

Robbie Henshaw, Devin Toner, Jack McGrath and Jamison Gibson-Park return to the starting team and Sean O’Brien to the replacements bench as the defending champions make one final push for a place in the knockout stages of the Heineken Champions Cup.

Leo Cullen, Stuart Lancaster and the rest of the coaching team devised a gameplan that was ruthlessly effective and the players responded beautifully in dismantling a Toulouse side that hadn’t lost in 12 matches. Those that stepped in, also stepped up, the transition seamless.

Wasps pose a slightly different challenge and that is reflected in selection, so too a desire to reintegrate players returning from injury.

Cullen explained: “He [Henshaw] trained all of last week and came through. He got a lot of confidence from that and trained well this week.

“He has formed a strong relationship with Garry [Ringrose] over the last few seasons so he’s looking good, looking sharp. He has worked incredibly hard during his rehab and looks in great nick. He’s raring to go.”

Cullen singled out Healy’s contribution against Toulouse before explaining why McGrath, with an extra week’s training having been left out of the match-day 23 against the French club, is named to start on Sunday.

“With the challenge that Wasps have, I think he [McGrath] suits some of the threats so that’s why we made the change.

“I think Cian [Healy] will give us good change-up from the bench as well, and it sorts of gives him the chance to freshen up slightly as well. But the power that he can deliver off the bench is important for us later in the game.”

Gibson Park replaces the unfortunate Luke McGrath – Hugh O’Sullivan will hopefully get to experience European rugby firsthand at some point – while Devin Toner returns to the second row after recovering from an ankle injury. Scott Fardy, who was outstanding against Toulouse, is named on a bench that also includes Seán O’Brien.

Cullen said that O’Brien was “excited” and “dying to get back” for a first game since breaking his arm in November, maintaining a ridiculously unfortunate run of injury.

“He looked on at a lot of the big games last year that he missed and I think it has given him a real taste for it, he wants to be back involved on the big days,” he added.

Rob Kearney (quad) trained all week but Jonathan Sexton and Dan Leavy haven’t returned to the group dynamic although, Cullen pointed out, both are close. Leinster’s back three and back row excelled against Toulouse while Ross Byrne controlled the game nicely, an obvious high point, the delightful cross-kick for Dave Kearney’s try.

Missing out on the Ireland squad was a personal setback but Byrne doesn’t need to prove anything per se and the only points-scoring exercise that’s relevant is what he contributes to Leinster’s cause on Sunday. Disappointment can be a positive fuel source when channelled correctly.

His game management against Toulouse was excellent and the challenge will be to retain that focus and singularity of purpose against Wasps.

The English club have nothing tangible to play for other than restoring a little pride in front of their home supporters following an RDS mauling earlier in the campaign.

Wasps coach Dai Young said: “We need to make sure we’re somewhere near our best or else it could be a tough day and we certainly don’t want that at home against any opposition. Leinster are a quality team as we’ve seen out there in Dublin. We were in that game for 45 minutes but then they changed gear and we couldn’t live with that. We certainly don’t want a repeat of that.

“It’s certainly a tough prospect, facing what is effectively the Irish national team just before the Six Nations. They’ll all be vying to impress to earn the green jersey in the coming weeks and they’ll want to do the job for Leinster.”

Despite missing marquee signings like Springboks Willie le Roux and Juan de Jongh amongst others and more pertinently their excellent openside Thomas Young, who was recently called up to the Welsh squad, Wasps possesses some beefy ball carriers and, if given any latitude, backs that can cause a few problems.

However it’s difficult to measure pride and its effect when confronted by a superior team. If Leinster establish a rhythm early on and can escape a little bit on the scoreboard then it’s difficult to see them being denied a bonus-point victory.