Quinn Roux set to miss out on Connacht’s Sale showdown 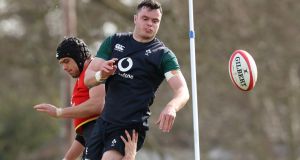 Ireland lock Quinn Roux is not expected to feature for Connacht on Friday after a heavy Six Nations campaign. Photograph: Laszlo Geczo/Inpho

The stakes are getting higher for Connacht as they head into Friday evening’s European quarter-final, and coach Andy Friend insists his side will continue to push the boundaries.

On the back of a bruising win against Benetton last week, which has ensured Connacht remain in the hunt for the PRO14 play-off stages, Andy Friend’s side now face Sale for the third time this season looking to keep their Challenge Cup campaign alive.

Each side enjoyed a home win in the group stages, but the Connacht coach says his squad has changed since that 34-13 pool defeat in October.

“I went back and watched the vision of the Sale game over there and it looks like the same bodies, but a different style of football we are playing,” he said.

Ireland lock Quinn Roux is not expected to feature after a heavy Six Nations campaign – “more unlikely than likely, unfortunately”, Friend says, but Bundee Aki is “looking good and ready to go”. Also unlikely to start are fullback Tiernan O’Halloran and captain Jarrad Butler who both took bangs in last weekend’s Benetton clash.

Having made few changes to this matchday squad in the recent weeks, Friend says it now time to mix it up again.

“We are very conscious that if we keep winning, which is our intention, we have another nine games left, and you can’t keep rolling out the same players for the next nine games of football.

“I think there is also a bit of recognition and reward for some players who have done well, and if we are going to be here for the next nine weeks, we have to keep people engaged too.”