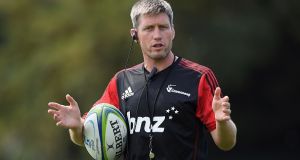 Media reports have indicated that French Rugby Federation (FFR) president, Bernard Laporte is looking to add Ronan O’Gara and Fabien Galthie to the France’s coach group, under current head coach, Jacques Brunel. The latter is believed to be receptive to the idea.

According to French newspaper Midi Olympique, Laporte conducted a post Six Nations debrief with the French coaching group by conference call on Thursday and then physically went to meet French captain Guilhem Guirado and centre Mathieu Bastareaud to sound out their thoughts on approaching Galthie, whom they both played under at Toulon.

Laporte has previously stated that he wanted to “bring more competence and other ideas,” following a bitterly disappointing Six Nations Championship. O’Gara is held in very high regard in France from his time at Racing 92 and it is in the capacity of defence coach that Laporte wants to recruit the Irishman on a short term contract that would encompass the World Cup.

O’Gara, an assistant coach to Scott Robertson at the Canterbury Crusaders, would potentially not be available until after the Super Rugby final on July 6th, if the defending champions make it back into this season’s blue riband match.

The current French defence coach is Jean-Marc Bédérède, remained in situ after previous head coach Guy Noves departed but Laporte was very unhappy with the way the team defended in the tournament.

He is believed to have previously tried to persuade former French defence coach Dave Ellis (2000-2011) to resume the role he once had but those entreaties were unsuccessful. O’Gara is reputed to be his preferred choice.

Meanwhile French radio station RMC are reporting that Paul O’Connell is set to leave Stade Francais just a year into a two year contract with the Parisian club because of a difficult working relationship with the club’s South African director of rugby Heyneke Meyer. This follows the news that Toulon have approached Mike Prendergast, an assistant coach at Stade Francais, to join them next season.