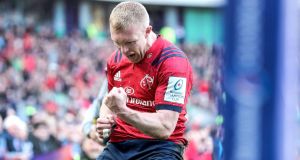 It was a remarkable victory borne in adversity and one that sums up the essence of Munster’s rugby genealogy. When everything is stacked against them, when the improbable looks impossible, they find a way to win.

The aesthetics won’t matter one jot; winning ugly can be every bit as fulfilling depending on the circumstances. Mongrel-esque proved to be best in show on the day in a riveting Champions Cup quarter-final.

The visitors suffered a raft of injuries before and during the match that would have destabilised a lesser group, but imbued with the spirit and character of previous Munster teams they refused to bow down; 14 victories in 18 quarter-finals needs little elaboration.

The contest was enthralling if pockmarked by errors but they didn’t detract from the spectacle, the outcome decided by tiny margins.

Munster struggled horribly at times, rarely found an attacking rhythm, probably overindulged in the kicking game, conceded 10 penalties. And yet when trailing 13-10 and with the home side in the ascendant as the game wound down, they were handed one final opportunity. They looked like a team that hadn’t played together in a while.

Edinburgh loosehead Pierre Schoeman left a shoulder in on Tadhg Beirne, spotted by the television match official Eric Gauzins and a scrum to the home side was transformed into a Munster penalty. Tyler Bleyendaal kicked into the Edinburgh 22 and rescued an overthrown lineout, Stephen Archer surged forward and when Conor Murray switched the play, Chris Farrell put Keith Earls in space and the winger scooted over for his second try of the match.

It was a brilliant finish, matched by replacement outhalf Bleyendaal’s touchline conversion. At 17-13 ahead with eight minutes left Munster clung on to the lifeline with a death-grip. It was apposite that they should finish the match with a defensive set that lasted over two minutes as Edinburgh went from touchline to touchline. But the team that had been the hunter was now the prey.

Munster won this match by virtue of their defence, in which the back three were outstanding, and at the breakdown where Jack O’Donoghue prior to his injury, Rory Scannell, Farrell and Beirne were immovable objects.

Edinburgh left nine points behind, electing to go to the corner with kickable penalties on three occasions in the first half; Munster also doubled down in this regard after the interval and they took came up empty-handed, first kicking a penalty to touch and then choosing to scrum from a second one.

It was a curious game, enthralling but lacking fluidity and continuity given the frequency with which each team turned over possession and a large sprinkling of indiscipline. Referee Pascal Gauzere allowed Edinburgh an inordinate amount of time in facilitating Pyrgos’s box-kicking but while he was laissez-faire in that regard he certainly wasn’t at ruck time; the amount of turnovers from both sides was staggering.

Edinburgh were very prescribed, inexplicably slowing down possession when they were breaching gainlines and should have been looking to inject tempo. Instead there was almost a lumbering orthodoxy to some of the home side’s efforts to realign.

Teams a mirror-image of one another, swapping box-kicks, the ball generally travelling 15-20 metres and for the most part contestable; both teams unsettled and errant in equal measure or in the case of Munster fullback Andrew Conway superbly assured, apart from one minor indiscretion.

Munster lost Mike Haley before the match, Conway switching to fullback and Darren Sweetnam coming in on the right wing and the optics didn’t get much better initially for the visitors in the opening throes of the contest as Edinburgh launched a full frontal assault on the Munster line.

The Irish province conceded three kickable penalties but Edinburgh elected to gamble and go for the corner but on each occasion were repulsed with some muscular, and at times heroic, goal-line defence. If Munster’s line remained intact then the same couldn’t be said of the red-shirted bodies.

Joey Carbery picked up an arm injury in the first couple of minutes with a brave tackle on Viliame Mata and he would eventually succumb to the physical ravages five minutes before the interval, this time departing with a hamstring issue. There was no immediate confirmation of whether it was a recurrence of the problem that kept him sidelined for three matches in the Six Nations Championship.

Jean Kleyn disappeared for a HIA and while he returned 10-minutes later, Munster flanker Jack O’Donoghue, who had been exceptional in making some telling tackles, did not pass the same procedure.

Despite huge adversity the visitors refused to buckle and there was much to admire in a series of goal-line stands. Edinburgh were preoccupied with piling in around the fringes and on two occasions might have crossed for a try had they recognised that the space and numbers were in the wider channels.

When Munster lost Beirne to a yellow card after 10 minutes for an early tackle following a John Barclay breakout and kick through, it seemed only a matter of time before they’d concede some form of points, but instead it was the visitors that struck from their first foray into Edinburgh territory.

Murray’s contestable box-kick forced a knock-on from Duhan van der Merwe. From a five-metre scrum, Pyrgos illegally knocked the ball loose and a whip-smart Earls took a quick tap and jinked over beautifully. Carbery produced the perfect response to the jeering by landing the conversion.

The score came very much against the head but by half-time Edinburgh had edged into a 10-7 lead with a try from Chris Dean, converted by Jaco van der Walt, with the outhalf also kicking a penalty. Bleyendaal and Van der Walt exchanged penalties after the re-start; CJ Stander was stopped millimetres short of the Edinburgh line as the visitors chased the game.

The game opened up, Conway made a brilliant try-saving tackle on Damien Hoyland, coming shortly after the Edinburgh eight had won a huge scrum penalty turnover. Then in the most innocuous of circumstances Munster discovered the road to redemption in the most unlikely circumstances and penned another chapter in a burgeoning story.

Replacements: S Berghan for WP Nel, M Bradbury for Barclay (both 57 mins); J Ritchie for Watson (70); M Bennett for Johnstone (72); R Ford for McInally, A Dell for Schoeman, C Shiel for Pyrgos (all 76).