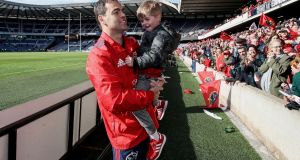 Munster’s resilience and ability to absorb setbacks and still find the wherewithal to confirm a third Champions Cup semi-final in succession is a precious commodity.

They lost fullback Mike Haley on the day of the match, injury removed Joey Carbery (hamstring) and Jack O’Donoghue in the first half and they scored a try when a man down with Tadhg Beirne off the pitch on a yellow card.

The at times fitful nature of the performance, the imperfections, doesn’t diminish the achievement. Munster coach Johann van Graan acknowledged as much as he sifted through the salient moments in a memorable day for the Irish province.

Carbery’s hamstring that kept him sidelined for the last three matches in the Six Nations tightened up and he was removed on 35 minutes but his deputy Tyler Bleyendaal was to have a seminal part in Munster’s revival. O’Donoghue, so prominent early on failed a HIA and didn’t return.

Van Graan admitted: “I’m delighted; it was an incredible game of rugby between two sides who didn’t know how to give up. We as a group spoke this whole week about how this game might go until extra-time, they certainly kept going and we kept going.

“I’m delighted, it’s our third semi-final in a row and this was a big one for us. Just look at the history of European rugby, you don’t come away with away quarter-final wins. We topped our pool, we knew were coming up against a very tough, disciplined side and I’m very glad we came through it.

“We got on the bus with the news that Mike \[was\] out. The way we train and the way we do things, nothing fazes us, we just adapt. I thought we handled that well. The yellow card, losing Jack and Joey in the first half, it’s a lot earlier than normal but we regrouped at half-time and changed one or two things tactically.”

Arno Botha, who forced a couple of big turnovers late on, replaced O’Donoghue, while Bleyendaal prove an able deputy.

Van Graan continued: “That’s the beauty of our squad. We’ve got four quality flyhalves. We made a decision to go with Tyler this weekend and once you get your opportunity you’ve got to use it; especially that last conversion from the touchline, that’s massive in the context of our season.”

On Carbery’s injury he explained: “Obviously, he’s very disappointed. He felt a bit of stiffness after about 25 minutes and said he’s going to play on. We don’t foresee it being serious, but it’s not for me to speculate at this stage. Ten minutes later he said he couldn’t continue so I pulled him.”

The Munster coach paid tribute to Darren Sweetnam – he had a superb game – called into the team on the right wing following Haley’s withdrawal with Andrew Conway. “When I went to him this morning I said ‘listen Sweets, the same thing happened in Exeter’ except this time he had more time to deal with it; that was in the warm-up.

“He had a bit of time to prepare himself. He’s a guy, like the other 53 or 54 players we have, who just wants the opportunity to play. Today it presented itself and he just played a fantastic 80 minutes.

“Your experienced players, your world class players need to step up on the big days and I thought he was excellent today; as was Conor [Murray], Pete [O’Mahony] and CJ [Stander]. I thought Chris Farrell had an excellent game, someone like Niall Scannell that doesn’t get a lot of praise for the set-piece; that was a real battle. It was a real gritty performance from our side until the last play.”

He also had a special word for the Munster supporters in the 36,000 crowd, typically passionate, noisy and colourful. “If you were inside the bus when we arrived here, it’s breath-taking to see the supporters. It felt like we were going to play at home.

“In terms of the group, that’s why I came to Munster because of what Munster is about. It’s about passion, integrity, real heart and real grit. Munster never seem to do it the easy way and we certainly didn’t.

“I’m incredibly proud to be coach of this team. The message from me to the team was ‘brilliant, let’s enjoy tonight. It’s our third semi-final in a row, it’s going to be a massive semi-final and we as a group have got big dreams and we will get to that in a few weeks time.”

Edinburgh coach Richard Cockerill explained that he would have to watch the match again to establish if Munster “deserved” to win. “They won the game, so yes they did. But I think it was a great game of rugby, it was two teams that played very well, it was one hell of a contest, and tiny, tiny margins decide these things.

“It’s a penalty that gets reversed,” referring to Edinburgh prop Pierre Schoeman’s clash with Beirne, “a lineout that gets overthrown and bounces their way, and in the ensuing play they score.

“We had opportunities to score in the first half we didn’t take. We had some massive moments in the game defending our own line. So I’m proud of the performance, but clearly disappointed with the end result.”