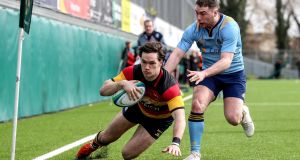 Lansdowne’s Dan McEvoy scores a try against UCD in their All-Ireland League Division 1A match at Aviva Stadium in Dublin on Saturday. Photograph: Ben Whitley/Inpho

Ireland Under-20 Grand Slam winner Rob Russell got among the tries as Dublin University claimed the scalp of All-Ireland League leaders Cork Constitution to take a step closer to a historic semi-final place.

Minus captain Niall Kenneally, Cork Con were comprehensively outplayed by the supercharged Trinity side in the second half, leaking five tries which were shared out between teenage winger Ronan Quinn (2), Russell, Rowan Osborne and prop Giuseppe Coyne, who was also part of the extended Ireland U-20 squad.

Alex McHenry sidestepped through for Con’s only try and a 10-5 lead, but the fourth-placed students, who now have a six-point advantage over Garryowen with two rounds remaining, stormed home, with Russell scoring from a Colm Hogan pass, Dan Sheehan’s offload playing in Osborne, Coyne crossing in the 65th minute, while Quinn’s second score came while Con’s Ross O’Neill and Dylan Murphy were in the sin-bin.

Garryowen’s play-off hopes took a serious hit with a 29-12 home defeat to Clontarf, who held onto second spot, with first-half tries from Angus Lloyd – via a Matt D’Arcy assist – and Vakh Abdaladze setting the tone. The division’s leading try-scorer, 20-year-old winger Peter Sullivan, took his haul to 12 tries with a brace in Lansdowne’s 57-31 triumph over UCD, the victors notching nine tries and the students five.

Only four points separate Division 1A’s bottom four sides after Terenure College won 18-12 at Shannon. Sam Coghlan Murray grabbed a try in each half for rejuvenated ’Nure, while UCC climbed above Young Munster into seventh spot after fullback Rob Hedderman’s 75th-minute try steered them past the Cookies – 13-10.

Malone and Naas vaulted back into the top four in Division 1B, winger Mark O’Connor scoring 11 points as the Belfast side won 16-7 against Armagh. There were try doubles for Fionn Higgins and Peter Hastie, along with Peter Osborne’s 17 points from the tee, as Naas ran out 42-21 bonus point winners away to Banbridge.

Despite being hampered by Cara Cup call-ups, Ballynahinch matched Old Wesley’s bonus point-winning exploits with a 34-27 success against Old Belvedere, the highlight being a superb hat-trick of tries from full-back Ross Adair. His Wesley counterpart Rory Stynes tallied up 16 points, including two tries, as they beat Buccaneers 29-13 in Donnybrook.

St Mary’s College remain in the play-off hunt thanks to a stunning 74-15 demolition of Ballymena, whose relegation to Division 2A was confirmed. Ireland U-20 scrumhalf Cormac Foley came off the bench to score three of Mary’s eventual 11 tries at Templeville Road.