Munster mix the old with the new in victory over Saracens 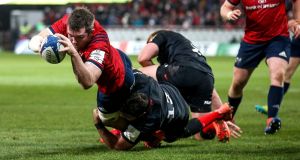 Munster remain a fascinating reworking in progress. However, the fear remains that, especially given their tough draw, they may be taking a step back in Europe this season in order to then take two forward.

Along the way though, they will never lose their ability to get down and dirty in terrible weather and eke out a low-scoring win. That will always be part of their DNA. It’s grist to the mill of their adopted son CJ Stander, who may hail from the Western Cape but revels in this stuff. He made 17 carries for 27 hard-earned metres as well as 17 tackles.

Hence, managing to play most of the final quarter in the Saracens’ half was an achievement, and so it was that Munster rolled up their sleeves and protected a one-score lead for the entire second half against the reigning champions.

The abiding memory will be the conditions, which no TV cameras can possibly convey. Within 10 minutes of the full-time whistle, the din of the crowd had given way to the rain pelting off the stadium roofs.

Accordingly, the scoreless second period was a grim affair, but with Conor Murray and JJ Hanrahan their heartbeat, when the conditions were at their best in the opening half-hour or so, Munster played the best rugby of the night.

Our eyes are not deceiving us, and Mark McCall freely admitted afterwards that in Saracens’ analysis of Munster this season they’d seen a significant change.

Conor Murray’s first-half performance gave the lie to the notion that he somehow might not be entirely suited to Munster’s higher tempo game. It’s noticeable how Munster are varying the target from Murray’s quick service as he very often skip passes the first or second forward aligned close to the gain line.

Munster might have had more for an 18-phase drive and ensuing scrum than the tap-over penalty by JJ Hanrahan, before Murray was the base for each of the 10 phases that culminated in what ultimately proved to be the decisive score of the game just past the half-hour and just as the rain began.

As was also often the case, Rory Scannell, who had a fine game, and Chris Farrell were heavily involved, the latter trucking up quick off-the-top ball to set the try-scoring move in motion and when Munster went wide right Mike Haley did well to keep the ball in play before Niall Scannell took Hanrahan’s diving pass off the deck.

When going wide left, it was Rory Scannell’s fizzing skip pass which gave Keith Earls a run and, critically, with the centre there for the clean-out and Saracens stretched and unable to contest for the ball, Murray was there for a rapid recycle. Again, the work-rate off the ball gave him options, Tadhg Beirne checking the inside defenders for Peter O’Mahony to take a lovely outside-in line on to Murray’s skip pass for the score.

Their accuracy will only improve the more they fine-tune this game. For example, in their eagerness, intended recipients occasionally over-ran the ball sometimes, as was the case when Farrell over-ran Earls’s pass in a reprise of a strike move they had employed against Racing, the centre’s slight knock-on thus meaning Rory Scannell’s finish off Andrew Conway’s inside pass was ruled out.

In mitigation, playing with the wind can make passing fiendishly difficult, and in the second-half, as the wind stiffened and the rain descended in torrents, possession became a liability.

Even one pass could result in a knock-on and as the recycling also slowed down, Munster simply had to cut their cloth, with a mixture of pick-and-goes, one-off rumbles and box kicks in what became an increasingly stressful period for Murray.

“Yeah, there are so many breakdowns in the game from the top you only see the obvious ones but we’re going to have a look at that,” said coach Johann van Graan of the increasingly slow ball.

Munster’s game is better suited to good conditions and the installation of an all-weather pitch at Musgrave Park should help when taking on the champions on their 4G pitch at Allianz Park.

Quick ball is now the life blood of their game.

“I thought when we got quick ball we put them under pressure,” said van Graan. “I think we are improving as a group. You are playing against one of the best defences in world rugby so from a positive sense we got some really good momentum tonight even though conditions were pretty difficult.”

“Even when you are with the wind, it makes the passing difficult and unfortunately that try we scored that got called back for the forward pass, you kind of forget those moments over 80 minutes and hopefully we can put a few of those away.”