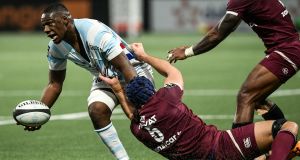 The sense of occasion is always slightly diluted if Simon Zebo is in the stands rather than on the pitch, and that will certainly be the case if, as seems likely, the Irish full-back is ruled out of a second reunion with Munster when the province face Racing 92 in their cinematic La Défense Arena in Paris on Sunday.

Zebo thrillingly set Racing in motion toward their 27-19 win over Clermont at home last Saturday with the early 60-metre break which led to the opening try in the seventh minute by tight-head prop Ben Tameifuna.

Barely able to walk immediately afterwards, Zebo was promptly withdrawn and could be seen leaving the ground with his left ankle in a brace and on crutches. His fiancee Elvira carried his kit bag while team-mate Juan Imhoff carried their third child, Noah.

Zebo apparently suffered a twisted left ankle, which is likely to rule him out of Sunday’s game, but otherwise Racing are pretty much at full strength, with 38 fit players out of their registered 40.

After struggling without their World Cup stars during the first few months of the season, when winning just two of their first eight games, they’ve also hit their best form of the season.

The victory over Clermont was their third in a row in the Top 14, lifting them to fifth in the table, and fifth in succession after the back-to-back wins over the Ospreys in Europe. Indeed, Racing have lost only one of their last eight games – a 34-30 defeat away by Top 14 leaders Bordeaux Bègles six weeks ago.

They’ve been far from their fluid best, but Racing have played their best rugby in Europe, and are unbeaten atop Pool 4 after putting away an under-strength Saracens by 30-10 at home and then drawing away to Munster.

Furthermore, far from having a laissez-faire attitude toward Europe, Racing (who won the Bouclier de Brennus when beating Toulon in the 2016 final in front of 94,000 people in the Camp Nou) are one of three French clubs which have openly declared their preference this season is the Heineken Champions Cup.

The others are Toulouse – who won last season’s French Championship and, like Leinster, desperately covet a fifth star on their jerseys – and Clermont, French champions for a second time in 2017 but who, like Racing, have never won the H Cup.

In Zebo’s probable absence, Brice Dulin would start at full-back against Munster

It could be an Irish misfortune that Connacht, Ulster and Munster face them all this weekend. This trio of French clubs can all pretty much seal their places in the knock-out stages this weekend – absolutely so in the case of Toulouse and Racing, and virtually so with regard to Clermont – while also taking significant steps towards securing home quarter-finals.

Accordingly, Racing are treating this Sunday’s game against Munster as a knock-out, for anything less could leave their fate hanging on Sunday week’s visit to the holders Saracens who, in that scenario, would most probably know that a win would take them through.

In Zebo’s probable absence, Brice Dulin would start at full-back against Munster, with Juan Imhoff and the other try-scoring machine, Teddy Thomas, on the wings. In another sign of their intent, they rested captain and defensive linchpin Henry Chavancy last weekend, and he is expected to be reunited with Virimi Vakatawa in midfield.

In the absence of Chavancy, and with Maxime Machenaud on the bench, Teddy Iribaren captained the side against Clermont, but Machenaud is expected to be restored next Sunday.

Up front, it could be that the scrummaging of the Georgian loose-head Guram Gogichashvili will be preferred from the start – with the mobility and ballast of Eddy Ben Arous to be sprung from the bench – alongside Camille Chat and Tameifuna.

The New Zealand-born Tameifuna returned from his post-World Cup holidays after representing Tonga so overweight that he reputedly exceeded the maximum scales in the club of 160kg. But after a pact with the club’s coaches that he could not resume cardiovascular training without getting under that 160kg mark, he has since shed several stone and is back playing again.

A replacement against Clermont, the other ex-Munster man, Donnacha Ryan, is expected to be reinstated in the second-row alongside Boris Palu and so spook Munster’s line-out once again. This is despite suffering an elbow in the throat last Saturday which left him unable to speak afterwards.

French World Cup flanker Wenceslas Lauret is also expected to be restored to the back-row alongside Baptiste Chouzenoux and number eight Yoan Tanga. In his early teens, Tanga so idolised the former Racing, Toulouse and French back-rower Yannick Nyanga that he adopted his name on social media, before going on to make his mark with Agen.

Courted by Stade Français at the end of last season, Tanga instead joined their Parisian rivals Racing primarily because of Nyanga’s role as director of rugby. In 17 games this season Tanga has been an ever-present. At 6ft 1in he is not the tallest back-rower in the game, but Tanga has a powerful amalgam of running and tackling, and is a clever player with good hands.

The club owner and multimillionaire benefactor, Jacky Lorenzetti, the coaches, Laurent Travers and Laurent Labit, and the players have made little secret of their desire to conquer Europe this season.

Lorenzetti has financed their state-of-the-art stadium and facilities and, amongst his many entrepreneurial interests, he also has his own range of vintage wines. He wants Racing to become a European brand as opposed to merely a French one.

Louis Dupichot, their outside back who is likely to be on the bench this Sunday, was recently asked if he and the club had a preference were they restricted to one trophy this season.

“We want to win both trophies,” he said, “but if we had to choose one, it would be the European Cup.”

Mourinho says more than pride at stake as Spurs host Arsenal 22:30
Paul Boyle’s hat-trick helps Connacht past Benetton 22:06
Jones targeting final victory as a springboard to a better place 22:05
Fifa make no allowance for minors moving from Republic of Ireland to British clubs 19:40
Pride, passion and a bit of madness - football runs through Cavan’s soul 20:25
Crossword Get access to over 6,000 interactive crosswords